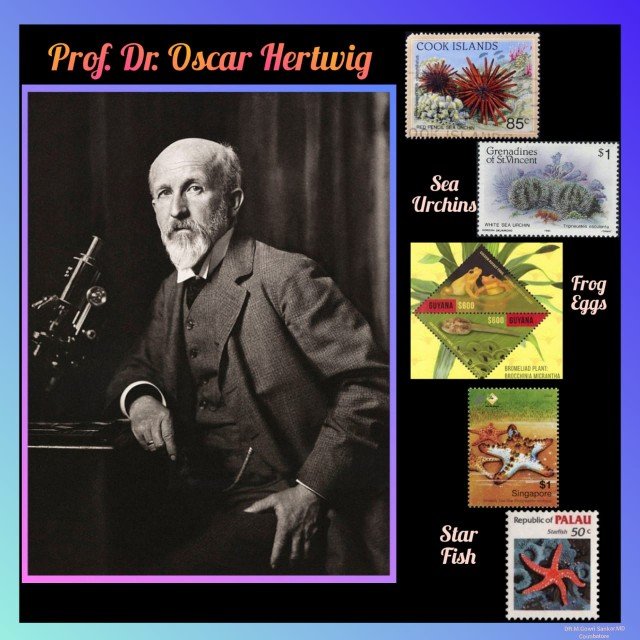 🔹Hertwig studied medicine and zoology at Bonn in 1872. He then obtained his lectureship in Anatomy at the University of Jena.
🔹Later, he became a Professor of Anatomy at the University of Berlin and was then promoted as Director of the newly established Anatomical-Biological Institute.
🔹Along with his brother, Prof. Richard Hertwig, who was a renowned zoologist, he did his principal works in the field of morphology of invertebrates, cytology and embryology.
🔹While he particularly studied about the Sea Urchins, he was the first who recognized and proved that fertilization occurs due to the fusion of the nuclei of the sperm and ovum – in the year 1875.
🔹He further explained that only one spermatozoon was required to fertilize an egg and as soon as the spermatozoon entered into egg, the egg formed a vitelline membrane, blocking any other spermatozoa from entering.
🔹Thereby, he observed all the steps of fertilization in Sea urchins. In fact, he selected the sea urchins as its small in size and its transparency suited for his microscopic studies.
🔹Subsequently, while on his experimental studies on the divisions of the frog egg, he observed that egg division occurs in random orientation.
🔹Hence, he compressed the egg between two parallel plates. The compression forced the egg to change its shape from round to elongated. He noticed that elongated egg divided to its long axis.
🔹Thus, he discovered that the new daughter cells were formed along with the longest axis of the cell and the name “Hertwig’s rule” or “Long axis rule” came to be.
🔹Furthermore, he was the first to report Parthenogenesis (a form of reproduction in which an egg can develop into an embryo without being fertilized by a sperm) in a Starfish in 1890. He also discovered mitosis and meiosis.
🔹Consequently, his groundbreaking work led Prof. Hertwig to be celebrated as one of the founders of the science of heredity and a pioneer in the experimental embryology.