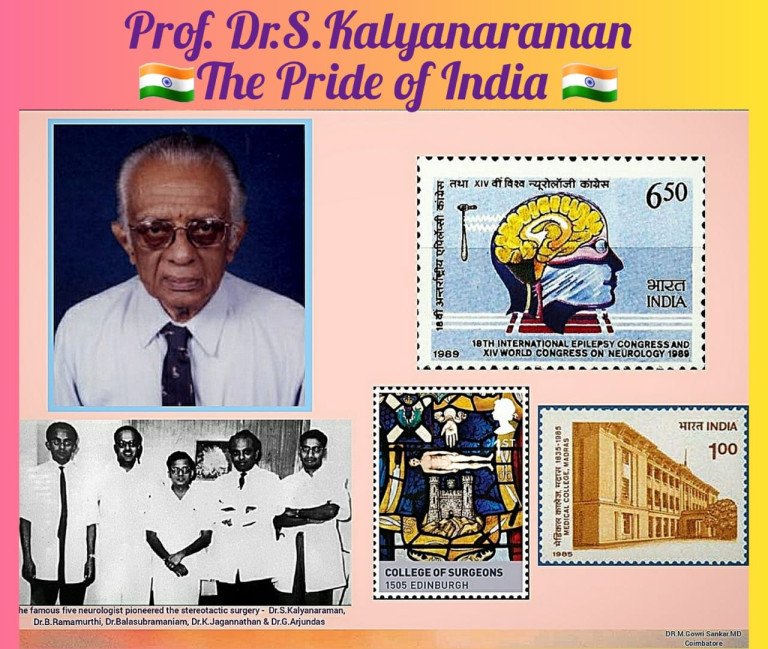 🔹Subramanian Kalyanaraman was born at Tiruchirapalli, Tamil Nadu in January 1, 1934.
🔹He studied medicine at Stanley Medical College, Chennai and completed his MBBS in 1956 and MS in 1959.
🔹Also, he got trained in neurosurgery at the Royal Infirmary and Western General Hospital, Edinburgh and became Fellow of the Royal College of Surgeons of London and the Royal College of Surgeons of Edinburgh in 1961.
🔹He became the first Indian, probably first in the world to complete Ph.D. in Neurosurgery at Royal College of Edinburgh.
🔹Upon his return to India, he joined as Assistant Professor at the Institute of Neurology of Madras Medical College (MMC), Chennai, where he served under the guidance of Prof. B. Ramamurthi, a Pioneer Neurosurgeon, who founded the institution in 1950.
🔹Dr. Kalyanaraman and the team of neurospecialists pioneered the Stereotactic surgery, a minimally invasive neuro surgery, by using Leksell and Sehgal stereotactic equipment.
🔹He performed many stereotactic procedures for involuntary movements, behavioral disorders, psychiatric disorders, epilepsy, parkinsonism and spasticity and won MMC international acclaim in the field of stereotactic surgery.
🔹In the year 1968, he became a Professor and then Head of the Department of Neurosurgery in 1986 and served the institution till his superannuation in 1991.
🔹During his career, he was instrumental in establishing the following:
▪️ Madras School of Psychosurgery.
▪️ First separate Head injury ward in 1967 at MMC.
▪️ First in India to introduce Continuing Medical Education(CME) program in 1979.
🔹As an academician, he published various articles in Peer-reviewed journals and contributed many chapters to various text books of Neurosurgery. Moreover, he was the first in the world publish the topic of stereotactic brain biopsy in the Journal of Neurosurgery.
🔹After his retirement, he established the Neurosurgery department at Apollo hospitals, Chennai and made it one of the biggest Neurosurgical departments in the private sector in our country.
🔹He was honoured by various awards in India and Overseas including the Shanti Swarup Bhatnagar award in 1969, which is one of the highest Indian science award.
🔹In order to honour the immense service of Prof. Dr. S. Kalyanaraman, the MMC introduced:
▪️ Prof. Dr. S. Kalyanaraman Endowment.
▪️ Prof. Dr. S. Kalyanaraman Oration.
▪️ Prof Dr. S. Kalyanaraman Neurosurgery Prize for Neurosurgery post graduates.