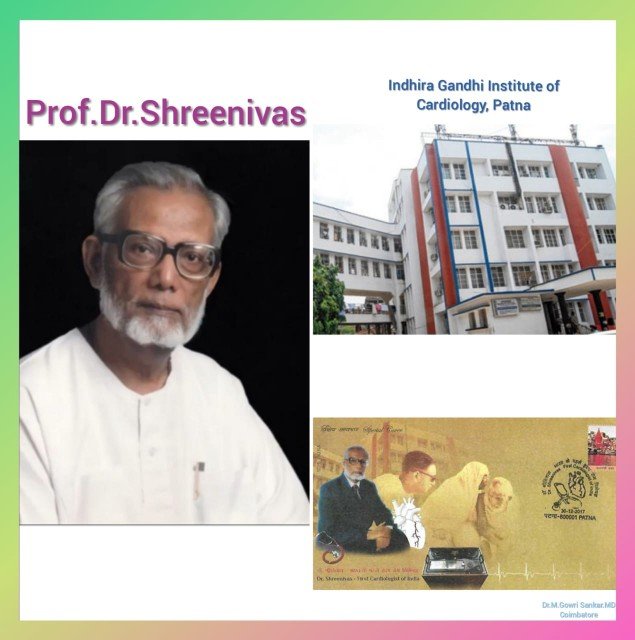 🔹Shreenivas was born in a small village called Birsinghpur at Bihar in a family of landlord.
🔹After his schooling, he joined at Patna Science College in 1936. Later he enrolled to study medicine from Prince of Wales Medical College & Hospital [now it’s Patna Medical College and Hospital (PMCH)].
🔹While completing his medical graduation, he got interested in studying Cardiology. Then, he emigrated to United States in 1948 for continuing his higher studies in Massachusetts General Hospitals, Boston.
🔹Subsequently, he received an opportunity to get train under the world famous Cardiologist and Professor Dr. Paul Dudley White at Harvard University and also with Dr. Frank N Wilson, who was the Father of modern Electrocardiography.
🔹He returned to India in 1952 and he introduced the ECG machine in India.
🔹Further, he joined at PMCH and established the exclusive Department for Cardiology in 1960 which is now called as Indira Gandhi Institute of Cardiology.
🔹He was the Founder-Director of this Cardiology Institute until 1976.
🔹Furthermore, he involved in developing “Shreenivas’s E V Method of Identification.” It’s a novel method of personal identification based on ECG criteria.
🔹Apart from that, he initiated the new concept called Polypathy. It’s actually a system of treating patients that integrates the best of care from various therapies such as western and traditional methods like Allopathy, Homeopathy, Unani, Ayurveda, Yoga, Tibbi, Naturopathy, Acupuncture to deliver personalized care to each patient.
🔹 In the year 1993, he represented India in Chicago at the Second World Conference of Parliament of Religions.
🔹Actually the first such conference was addressed by Swami Vivekananda exactly a century ago. Thereby, Dr. Shreenivas was recognized as a multi-faceted personality.
🔹In order to honour his tremendous achievements, the Postal Department of the Government of India came forward and introduced a special postal cover on his name in the year 2017.

The Wizard of Cardiology