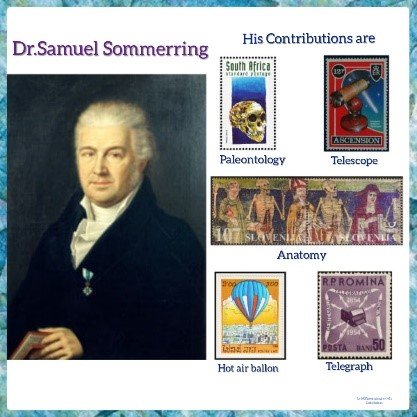 🔹Soemmering was born in Germany as the ninth child of the physician father Johann Thomas Sommerring.

🔹Subsequently, he made several essential contributions such as:

🔅Discovered the macula in the Retina.

🔅Researched the anatomy of sense organs, published illustration studies on the Organ of Sight, Hearing, Taste and Smell.

🔅First person to give fairly accurate representation of Skeletal structure.

🔅Soemmerring’s ligament – The suspensory ligament of the lacrimal gland.

🔅Soemmerring’s muscle – A fasciculus occasionally passing from the thyrohyoid muscle to the isthmus of the thyroid gland.

🔅Soemmerring’s ring cataract – One form of After cataract (which can occur following cataract surgery).

🔅Soemmerring’s spot – The macula lutea of the retina.

🔹In fact, his restless curiosity in Anatomy can be witnessed through his descriptions of the optic chiasm, the pineal body, brain and spinal anatomy, the lungs, the ear, the senses of smell and taste, and embryonic and developmental defects. Thereby, he became “One of the outstanding anatomists of his era.”

🔹Apart from above, he had done various non-medical contributions, that include…

🔅Designed a telescope for astronomical observations.

🔅Did experiments with hot air balloons and the first German balloon was off the ground in 1783.

🔅Constructed the early version of Electric telegraph in 1809. His telegraph consists of thirty-five wires, one for each letter of the alphabet and one for each number.

🔅He was also interested in study of fossils and was an early member of the Paleontological society.