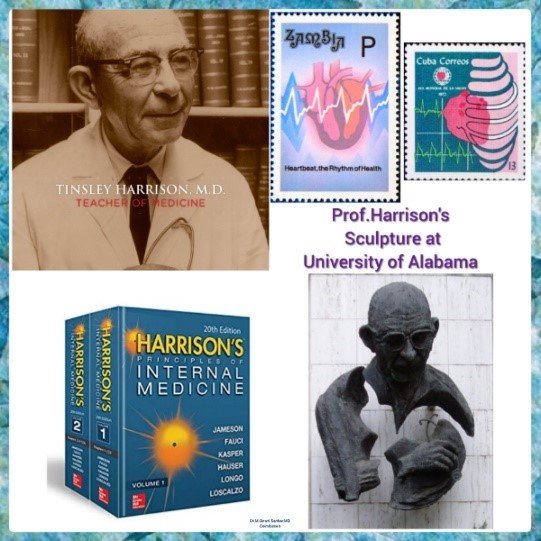 🔹Tinsley Harrison was born in 1900 in Alabama and then his family moved to Birmingham in 1906. His father Dr. Groce Harrison was a sixth-generation physician of his family.

🔹Dr. Groce Harrison was the student of Sir William Osler, who is the father of modern medicine. When, Tinsley was three years old, Osler prophesied that Tinsley would become a great teacher in medicine and he advised his father to train him as such.

🔹After his internship, he did his one-year residency in Boston at Harvard University’s Brigham and Women’s Hospital.

🔹Then he joined as Chief Resident in Medicine at Vanderbilt Hospital & Medical School in Nashville in 1925, where he served around 16 years.

🔹While in Nashville, he got an opportunity to associate again with his friend Dr. Alfred Blalock, who served as a Chief Resident in Surgery. Harrison showed interest in the field of cardiovascular medicine and published mind boggling 107 original scientific articles.

🔹Subsequently, he pioneered various aspects of cardiac failure, including the mechanism of dyspnoea, fluid balance, electrolyte abnormalities and cardiac output. In fact, he was one of the first to measure the cardiac output in dogs by using Fick’s principle.

🔹After ten years of intensive work, he published his outstanding monograph in cardiac failure named as “Failure of the Circulation” in 1935, which became a standard text book very shortly.

🔹Later, Dr. Harrison got appointed as the First chair of medicine and second Dean at the Medical College of University of Alabama at Birmingham (UAB).

🔹Actually, he became world famous through his book – Harrison’s Principles of Internal Medicine published in 1950. It became the standard text in the practice of internal medicine.

🔹His book was the single most used and best-selling Internal Medicine Text Book in the world and translated into 14 different languages.

🔹Dr. James Pittman, who studied and worked with Dr. Harrison, published his biography in the name of Tinsley Harrison, MD Teacher of Medicine.

🔹Dr. Harrison was ultimately recognized as the best academic physician and one of the most important medical figures of the 20th century. In his life time, he used to mention “Always do what is right, not what is best, in all of life’s endeavours.”

A Day to Commemorate