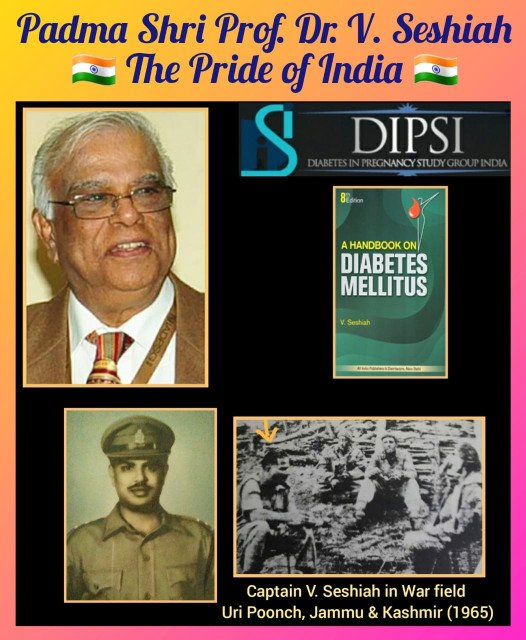 🔸Seshiah was born and brought up at Chennai. His father Mr. Veeraswamy was an employee of Railways and his mother Mrs. Bavanamma was a homemaker.

🔸Inspired by his elder brother, Dr. Perumal, Seshiah enrolled himself to study medicine at Madras Medical College in 1957 on its Golden jubilee year.

🔸In 1962, he volunteered himself to serve in the Indo-China War. There he joined as Lieutenant in Indian Army Corps. Then he was promoted as Captain for Infantry Battalion in J&K and also took part in the Indo-Pak War.

🔸In recognition of his service to nation in the war field, he was awarded Samar Seva Star and Sainya Seva Medal.

🔸Then he completed his MD in Medicine at Stanley Medical College. He was tutored by the great teachers Prof. M. Viswanathan and Prof. P. B. Sadhasivam.

🔸After his studies, he joined as an Assistant professor at Madras Medical College (MMC) and got an opportunity to work with his mentor Prof. Sam G. P. Moses.

🔸Moreover, Dr. Seshiah had the foresight (4 decades back) that diabetes is going to rule the world.

🔸Subsequently, he established the India’s first exclusive Department of Diabetology in 1979 with the great support and guidance of Prof. Sam G. P. Moses. Thereby he became the first and youngest Professor of Diabetology at the age of 40 years.

🔸Additionally, he began the first Post Graduate Diploma course in Diabetology at MMC in 1985.

🔸Being a man of perseverance, he was eager to annul the root cause for diabetes. Therefore, he started focusing on pregnant mothers and made blood sugar test mandatory.

🔸His significant contributions in GDM…

🔹Took the initiative to start separate clinic for Pregnancy & Diabetes in Government Hospital for Women and Children at Egmore, Chennai in 1979.

🔹Introduced A Single Step Procedure to diagnose GDM – An economical and evidence based test. This guideline was adopted by Ministry of Health & Family Welfare, India and by World Health Organisation (WHO).

🔸Further, he was also a consultant to the World Health Organisation, International Diabetes Federation and the Ministry of Health, Govt of India.

🔸He authored the famous book A Handbook on Diabetes Mellitus and published many original articles in reputed International and National journals.

🔸Prof. V. Seshiah has been honoured with several awards including the Dr. B.C. Roy National Award for development of diabetes as an area of specialization in our country and the prestigious Padma Shri Award from the Government of India in 2022. His Alma Mater, MMC institution has introduced Prof. Dr. V. Seshiah Endowment Oration from 2022.

🔸 In order to recognize his selfless service and lifelong dedication to GDM, his birthday (March 10th) has been declared as National Gestational Diabetes Mellitus Day.

A Physician with Determination & Perseverance