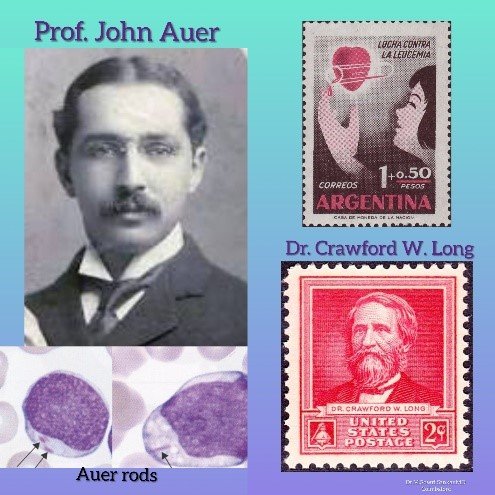 🔸Today is National Doctors Day – a day to honour Physicians in United States of America.

🔸This day is to commemorate the anniversary of the first use of Ether anaesthetic agent during surgery on March 30, 1842 by an American Physician Dr. Crawford Long.

🔹John Auer studied medicine and graduated from Johns Hopkins School of Medicine in 1902.

🔹After his studies, Dr. John Auer started working with his father-in-law Dr. Samuel Meltzer, who was an inventive physiologist at Rockefeller Institute for Medical Research, New York. After some time, they together performed many studies in the field of medicine.

🔹In fact, Dr. Auer was the first to describe “a needle or rod shaped intracytoplasmic inclusion bodies in leukemic cells” in the year 1906 in a 21 year boy, who was presented with nasal bleed.

🔹Further, he did his experimental studies in Guinea pigs in relation to Immediate anaphylaxis and gave the hypothesis that Bronchial asthma is due to hypersensitivity reactions to foreign substances.

🔹Later, he investigated the effect of magnesium on tetany.

🔹Also, he devised a Intratracheal Insufflation machine, which is a method of ventilating the lungs with anaesthesia during open thoracic surgeries.