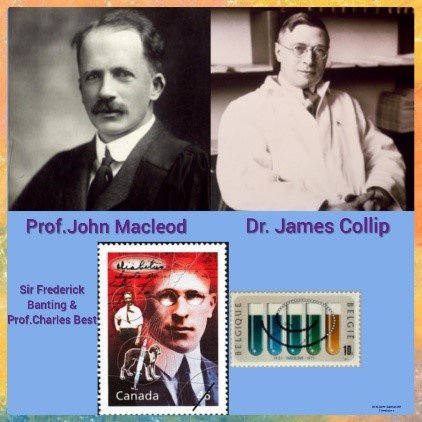 🔹After completion of his studies, he worked in various reputed institutions in London and United States.

🔹In 1918, he got appointed as a Professor of Physiology at the University of Toronto, Canada. Later, he was promoted there as a Director of the Physiological Laboratory and Associate Dean of the Faculty of Medicine.

🔹Indeed, the story of discovering Insulin began during 1920.

🔹Dr. Frederick Banting, a young Canadian physician approached Prof. Macleod with an idea of curing diabetes by using an extract from pancreas.

🔹Prof. Macleod took up his research proposal and agreed to use his laboratory to isolate pancreatic extracts from dogs. He also provided ten experimental dogs and two of his medical students Charles Best and Clark Noble, as lab assistants.

🔹As Prof. Macleod had worked closely with Dr. Banting, they had numerous conflicts often regarding the planning and execution of the research. However, their conflict ended in the discovery of Insulin.

🔹In fact, Prof. Macleod was the one who suggested a name for their newly invented substance called “Insulin.“

🔹Subsequently, Dr. Banting and Best were finding difficulties in refining the pancreatic extract, thereupon Prof. MacLeod called his research Scholar James Collip, a Canadian Biochemist to join with the research team for support. Thereby, Collip refined the insulin in a more pure and usable form.

🔹In the capacity of the Director of the investigation, Prof. Macleod had played a very critical role after the discovery such as in supervising insulin production, clinical trials, licensing and ongoing research.

🔹Finally, he was honoured by shared Nobel Prize in Physiology or Medicine with Dr. Banting in 1923 for the ground breaking work on discovering Insulin.

A Stabilizing Force in the Insulin Discovery