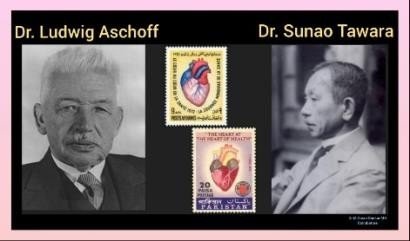 🔸Aschoff studied medicine at the University of Bonn in 1889. He continued his studies and worked with various reputed institutions and with prominent scientists including Dr. Robert Koch.

🔸He was appointed as a Professor of Pathology at the University of Freiburg, where he serviced until his retirement. While working, he established an exclusive Department for Pathology which attracted students from all over the world.

🔸During his career, he made an outstanding contribution in the histological studies of the heart.

🔸Dr. Aschoff and his student Dr. Sunao Tawara from Japan made major contributions in the conductive system of the heart and discovered the Atrio-Ventricular node – called as AV node or Aschoff-Tawara node.

🔸Further Dr. Aschoff was the first to discover the nodules in the myocardium among Rheumatic fever patients. This was named as Aschoff bodies.

🔸In 1924 he delivered a speech at Stanford Medical School – “A Perceptive Overview of the Pathophysiology of Atherosclerosis.”

🔸Moreover, Dr. Aschoff supported the theory that atherosclerosis occurs due to the abnormal lipid metabolism.

🔸He further declared that lipid levels in the plasma is essentially influenced by the nature of diet.

🔸In addition, he acknowledged the term Wear and Tear on Vascular intima resulting from mechanical stress. It was responsible for the rate of progression of atherosclerosis.