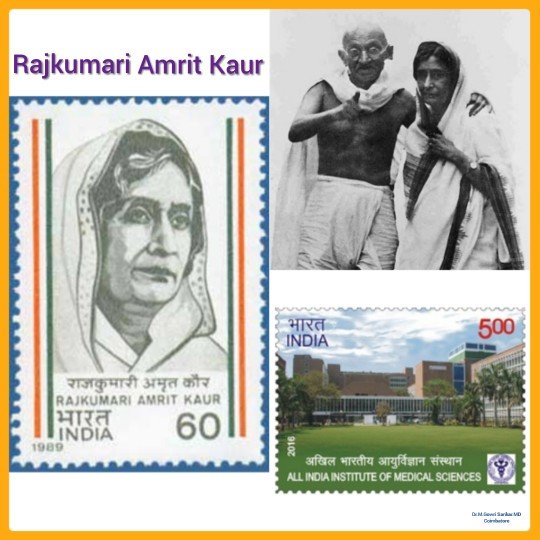 🔸Amrit Kaur was born to Prince Harnam Singh (the younger brother of the prince of Kapurthala) in Lucknow, Uttar Pradesh.
🔸She had her schooling at Sherborne School for Girls in Dorset, England. During school days, she was equally interested in academics and sports. In fact, she was the captain of the school’s hockey and cricket team.
🔸After her schooling, Kaur completed her college education at Oxford and returned home in 1918.
🔸In home town, she was introduced to freedom fighter Gopal Krishna Gokhale, a close friend of her father. She was greatly influenced by the way of Gokhale’s dedication towards freedom movement.
🔸 After the Jallianwala Bagh massacre, Kaur became a strong critic of the British rule in India.
🔸In 1926, she founded All India Women’s Conference, a first-of-its-kind organisation that worked for the rights of women. She also focused on a wide range of political and social issues, such as the abolition of purdah, child marriage and the devadasi system.
🔸Thereafter, she took part in the Dandi March with Mahatma Gandhi and soon she became the Gandhi’s private secretary. She held the post for 16 years.
🔸During freedom movement against British, she participated in various dharnas and protests and was injured, multiple times by brutal lathi charges. She was even imprisoned for some time for her leadership of the protests.
🔸After India’s Independence, Kaur became the first woman to hold a cabinet position and the country’s First Health Minister, under the Prime Minister Jawaharlal Nehru.
🔸Being the country’s first Health Minister, she was instrumental in setting up…
🔅Tuberculosis Association of India.
🔅Indian Council of Child Wel­fare.
🔅Central Leprosy and Research Institute, Chennai.
🔅Rajkumari Amrit Kaur College of Nursing.
🔅National Institute of Sports in Patiala.
🔸Moreover, Kaur is remembered for her dedicated campaign against malaria, which kills around one mil­lion lives a year in our country.
🔸In 1950, she was elected as the president of World Health As­sembly (which governs the WHO) – The first woman and the first Asian to hold the prestigious post.
🔸She also served in various positions such as:
🔅President of the Indian Leprosy Association.
🔅President of the Tuberculosis Association.
🔅Vice President of the International Red Cross Society.
🔅Chief Commissioner of the St. John’s Ambulance Brigade of India.
🔸She is best known for her instrumental role in establishment of AIIMS at New Delhi by passing AIIMS Bill in 1956 in both the houses of Parliament and subsequently she became its first president.
🔸She further donated her ancestral mansion in Shimla to AIIMS as a holiday retreat and a rest home for the staffs and nurses of the Institute.
🔸 Her dream for AIIMS was… “I want this to be something wonderful, of which India can be proud, and I want India to be proud of it.”  That dream has come true.

The Princess of Hearts