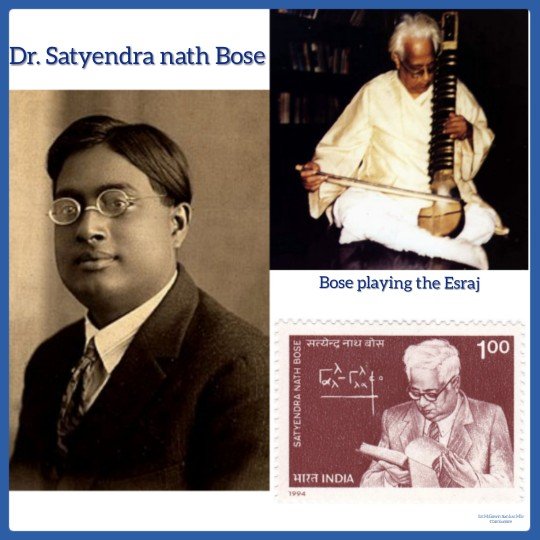 🔹Bose was born in Calcutta, West Bengal, India. His father was an Accountant in the East Indian Railway Company.
🔹During his school days, he was skillful in mathematics. Since his father wanted to encourage Bose’s skill, he used to give him few arithmetic problems to solve regularly.
🔹After his schooling, he chose to study the Bachelor degree in mathematics at Presidency College, where he was luckily taught by great teachers like Jagadish Chandra Bose and Prafulla Chandra Ray. He then did his Masters in the same subject from the University of Calcutta in 1915.
🔹Subsequently, he became a research scholar during the period when new discoveries were coming up in the field of Physics. In 1919, Bose and Meghnad Saha together translated renowned German physicist Albert Einstein’s General Relativity paper from French and German to English.
🔹Afterwards, Bose moved to University of Dhaka as a Reader of the Department of Physics. There, he did his scientific work for around 25 years.
🔹Furthermore, Bose had written a paper in physics, which was actually seminal in creating the very important field of Quantum Statistics. But unfortunately, his paper was not accepted for publication. Hence, Bose sent his article directly to Albert Einstein addressing him as “Respectful Master.”
🔹Einstein recognized the importance of the article, so he translated it into German and submitted to the prestigious German scientific journal on behalf of Bose.
🔹 Then, Einstein replied to Bose saying that his work was “… an important step forward and I liked it very much.”
🔹Later, his article was published and gained recognition as one of the most important theoretical papers in the Founding of Quantum Theory and began the new field of Quantum statistics, which laid the foundation for Bose-Einstein Statistics.
🔹Thereupon, Bose gained International Recognition and was invited to Europe to work at X-ray and crystallography laboratories. He agreed the offer and worked with Einstein as well as Louis de Broglie and Marie Curie for two and half years.
🔹Moreover, Einstein adopted the idea of Bose and applied it on the atoms – this gave birth to Bose-Einstein Condensate. Especially, the particles that follow Bose’s statistics have been named Bosons in his honor.
🔹After returning to India, Bose continued his research and started designing the equipment for X-ray crystallography.
🔹After some time, his work on Quantum mechanics was widely accepted in various departments including the imaging properties such as Magnetic Resonance Imaging and Electron Microscopy.
🔹His work on X-ray Crystallography is also widely used in medicine. It revealed the structure and function of many biological molecules including vitamins, drugs, proteins and nucleic acids such as DNA.
🔹Although, ten Nobel Prizes have been awarded for research related to the concepts of the Bosons and the Bose-Einstein Condensate yet, the co-founder of the research, Bose was never awarded with Nobel Prize.
🔹However, his work was eventually recognized and honoured with India’s second highest civilian award Padma Vibhushan in 1954. Further he was appointed as the National Professor in 1959, which is the highest honour for a scholar.
🔹Besides his academic life, Bose was a known for polyglot and also an accomplished musician who played the musical instruments flute as well as the stringed instrument Esraj.
🔹In addition, Indian Government established the S. N. Bose National Centre for Basic Sciences in Salt Lake, Calcutta.
🔹Rabindranath Tagore had dedicated his exclusive book on science, “Visva-Parichay” to him.
🔹In 2015, a New York Times article described Bose as the “Father of the God Particle.”

A Giant of Science