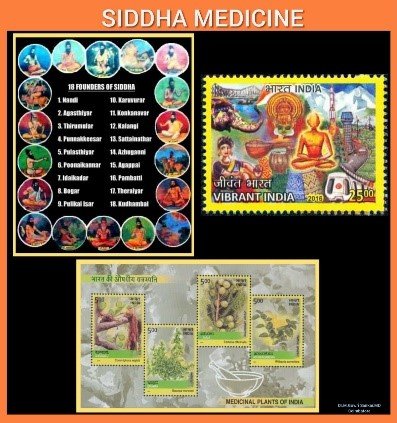 🔹Moreover, the Siddha is a Traditional Treatment System generated from Tamil culture and is entirely in Tamil language. The Palm leaf manuscripts say that the Siddha system was first described by Lord Shiva to his wife Lord Parvati.

🔹Actually, the Siddhars who got 8 supernatural powers laid the foundation of this traditional medicine.

🔹Among 18 Siddhars in that period, Sage Agasthyar is considered the Father of Siddha Medicine.

🔹The concept behind the Siddha is that the Healthy soul can only be developed through a healthy body. Hence, they developed the practices such as periodic fasting, meditation and yoga. Indeed, Lifestyle plays a significant role in health and in curing illness.

🔹They further developed the drugs either from thavaram (herbal product) or thandu (inorganic substances) or jangamam (animal products).

🔹In order to recognize the Siddha Medicine, the Ministry of AYUSH, Government of India, observs Siddha Day on Siddhar Agasthiyar’s birth star “Ayilyam” in the Tamil month Margazhi every year.