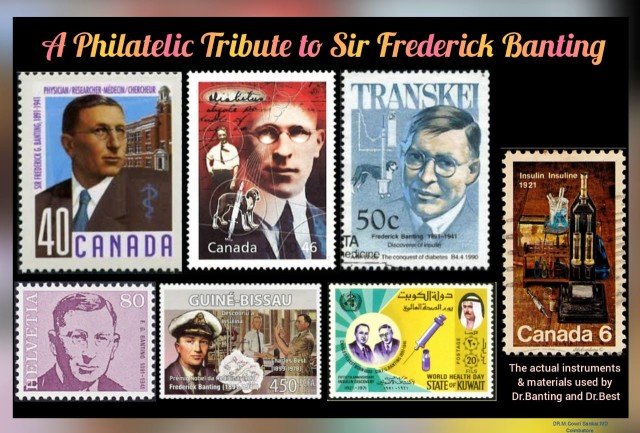 🔹Banting was born in a farmer family and studied medicine at the University of Toronto in 1912.
🔹During that time, there was a great demand for medical officers due to the outbreak of First World War. Banting volunteered himself to serve as a Battalion Medical Officer in the Canadian Army Medical Corps.
🔹Unfortunately, Banting was severely injured in the war field, yet he helped other wounded soldiers for continuous sixteen hours. That heroism earned him a Military Cross award.
🔹After completion of the war, he returned to Toronto and completed his medical course. He then studied Orthopedic surgery.
🔹After his studies, he began his career in the University of Western Ontario and then served as a Lecture in Pharmacology in the University of Toronto, where he completed his MD in 1922.

🔹During 1889, the German researchers Joseph von Mering and Oskar Minkowski together investigated on dogs by removing their pancreas and found that the dogs were immediately affected by severe diabetes. Then they hypothesized that the pancreas control the glucose metabolism by generating a hormone.
🔹While Dr. Banting was preparing a lecture about the function of the pancreas, he read an article titled “The Relation of the Islets of Langerhans to Diabetes with Special Reference to Cases of Pancreatic Lithiasis.”
🔹Consequently, Dr. Banting had started his preliminary experiment to proceed further investigations on the relationship between pancreatic secretions and diabetes.
🔹In fact, the story of discovering insulin had began when Dr. Banting approached the famous physiologist Prof. John Macleod, with an idea of curing diabetes by using pancreatic extract. Prof. Macleod was an expert in carbohydrate metabolism at the University of Toronto.
🔹Immediately, Prof. Macleod took interest in his research proposal and agreed to use his laboratory. He provided around ten dogs for this experiments and dedicated one of his medical student Charles Best for lab assistance.
🔹In a few months time, Dr. Banting and Best successfully isolated the insulin hormone secreted from the pancreas.
🔹Additionally, the team got an assistance from Dr. James Collip, a Biochemist at the University of Toronto. Thereby, Collip got involved and refined insulin into a more pure and usable form.
🔹Finally, Dr. Banting sold the patent rights of insulin to The University of Toronto for $1 and claimed that The Discovery Belonged to the World, Not to Him.
🔹Ultimately, the insulin saved the life of 14-years old boy Leonard Thompson in January 1922, who was almost close to death, but after the First successful treatment done with insulin, Leonard bounced back to life.
🔹Thereby, Dr. Bating was acknowledged as being the first person to use insulin among humans.
🔹On May 1922, Prof. Macleod delivered a paper entitled The Effects Produced on Diabetes by Extracts of Pancreas, in the Association of American Physicians meeting held at Washington D.C. In that meeting, the team introduced the word “INSULIN.”
🔹In 1923, Dr. Banting was highly praised for being the first Canadian and the youngest person (32 years) to receive the shared Nobel Prize for Medicine with Prof. Macleod for the wonderful discovery of insulin.
🔹As Dr. Banting wanted to recognize the work of his partner, he shared his prize amount with Dr. Best. Likewise, Prof. Macleod shared his prize amount with Dr. James Collip.
🔹In order to remember his fabulous work, The University of Toronto established the “Banting and Best Research Fund” and also the Banting and Best Department of Medical Research in 1930.
🔹Dr. Banting was also a War Hero, who served Canada in both World Wars.
🔹During the outbreak of the Second World War, Dr. Banting again volunteered himself to serve Canada by coordinating the research on treatments for mustard gas. But unfortunately, he lost his life at the age of 49 due to a sudden plane crash.
🔹To confer an honour, his birthday, November 14 has been declared the World Diabetes Day.

A Physician Who Unfolded the Secrets of Insulin