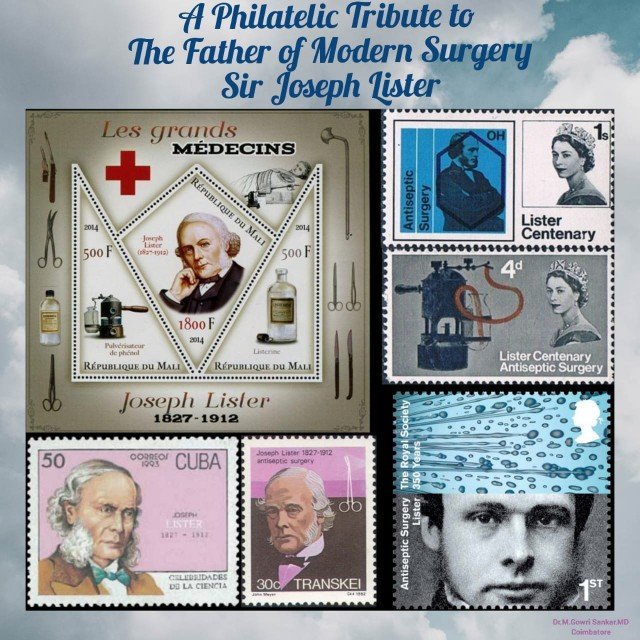 🔸Lister was born in Essex, England. His father was a wine merchant as well as an amateur scientist, who was the first to use achromatic lens for compound microscope.
🔸Lister wanted to follow his father’s foot step and had shown his interest in science in his young days. Fortunately, he witnessed the first surgical procedure carried out under anaesthesia in 1846.
🔸Since it inspired him greatly, Lister studied medicine in London and become a Fellow of the Royal College of Surgeons in 1852.
🔸After his studies, he approached the Professor of Clinical Surgery Dr. James Syme in Edinburgh to get trained in surgery. Shortly, Lister became his dresser, then house surgeon and also married his daughter Agnes Syme.
🔸In 1860, Lister moved to Glasgow and became a Professor of Surgery.
🔸While he was a surgeon at Edinburgh Hospital, Lister observed that several patients who underwent surgery had died from ward fever and also observed that 45 to 50 percent of amputation patients died from sepsis.
🔸In those days, it was believed that the infections used to arise from the wounds itself.
🔸In fact, Dr. Lister’s eureka moment came when he read about Louis Pasteur’s Germ theory. As Dr. Lister was a son of wine merchant, he realized that the wine goes bad because of fermentation process by the microorganisms. He then concluded that microorganisms are responsible for wound infections.
🔸He also learned that sewers used carbolic acid (Phenol) as a disinfectant agent.
🔸He then decided to experiment by using carbolic acid. He used carbolic acid soaked with dressings to cover the wound. Thereby, he successfully reduced the rate of infection.
🔸Further, he experimented with washed hands and sterilised bandages, surgical instruments with carbolic acid before every surgery to limit infections.
🔸Moreover, he invented a special pump sprayer to spray carbolic acid in the operating room.
🔸Subsequently, he adopted a novel concept of using sterilized catgut for internal sutures and sterilized silver wire to treat orthopedic injuries.
🔸Then he published his landmark experiments and low infection rate in post operative period in the journal “The Lancet” in 1867.
🔸But it took almost a decade to gain widespread acceptance of Listerian principles. Actually, his work transformed the surgical practices and thereby he is celebrated as the Father of Antiseptic Surgery and a Pioneer in Preventive Medicine.
🔸Consequently, Dr. Joseph Lister was recognized for his many significant contributions to modern surgery and ultimately knighted as Sir Joseph Lister in 1883.
🔸He was also the Vice President of the Royal College of Surgeons and President of the Royal Society. Further, he helped to establish the British Institute of Preventative Medicine in 1891, which was later called The Lister Institute in his honor.
🔸On the centenary year of his death in 2012, Sir Joseph Lister was honoured by the title – THE FATHER OF MODERN SURGERY.