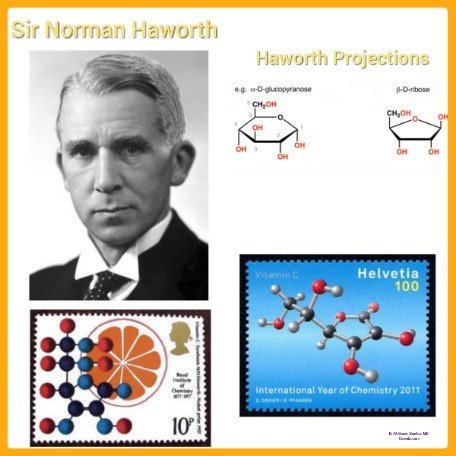 🔹In fact, he became a well-known Organic Chemist by devising the Ring like structure representation for glucose, maltose, lactose, starch and glycogen molecule. His way of writing a structural formula with a simple three-dimensional perspective is known as Haworth Projections.

🔹Later in the year 1933, Haworth and his assistants jointly concluded the Correct Structure and Optical Isomerism of Vitamin C.

🔹 After that, he suggested the name Ascorbic acid. Later, it became the universal name for vitamin C.

🔹In Latin, “A” means Away and “scorbic” means scorbuticus (pertaining for scurvy).

🔹Of course, it was the First Vitamin synthesised chemically and his discovery paved the way for artificial and low-cost production of Vitamin C and made it commercially available.

🔹Additionally, he penned his knowledge and published few books. The book called “The Constitution of Sugar” published in 1929 became the standard text book of domain in Biochemistry.

🔹In order to, recognize his ground-breaking discovery, Dr. Howarth was honoured with Nobel Prize of Medicine or Physiology in 1937 for his exclusive contributions in Carbohydrates and Vitamin C. Further, he was knighted in 1947.