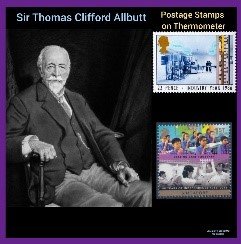 🔹Allbutt pursued medicine at St George’s Hospital, London and completed his graduation from Cambridge in 1861.

🔹After his studies, he went to Paris to get trained. There he got an opportunity to undergo training along with two champions Dr. Armand Trousseau (famous for his Trousseau’s sign) and Dr. Duchenne (a famous neurologist – an era of modern neurology started from him).

🔹In 1892, he got appointed as a Professor of Anatomy and Medicine at the University of Cambridge. He served there all over his career.

🔹He further contributed himself to medical education, especially in bedside medicine. He instructed his students to spend more time with patients in the ward.

🔹Moreover, he was the first to introduce routine Clinical use of Ophthalmoscope in Britain and extended its usage beyond ocular diseases. By using the fundoscopy method, he was able to show numerous signs like Papilledema, optic atrophy etc.

🔹He urged the importance of temperature chart and he was the first to introduce the weighing scale and microscope for the clinical wards. This led to an evolution of the medical practice.

🔹Dr. Allbutt was well-known for his protean knowledge of medicine. In 1866, he upgraded the oldest thermometer of 10-inches to a new invention of 6-inches.

🔹Furthermore, he penned eight volume books called “A System of Medicine,” which were published between 1896-99. It was considered the “Doctor’s Bible” and widely used as the text book of medicine in Britain.

🔹He also wrote an article on “The History of Medicine” in the Encyclopaedia Britannica in 1911.

🔹Further, he supported Sir William Osler in the founding of “The History of Medicine Society” at The Royal Society of Medicine, London in 1912.