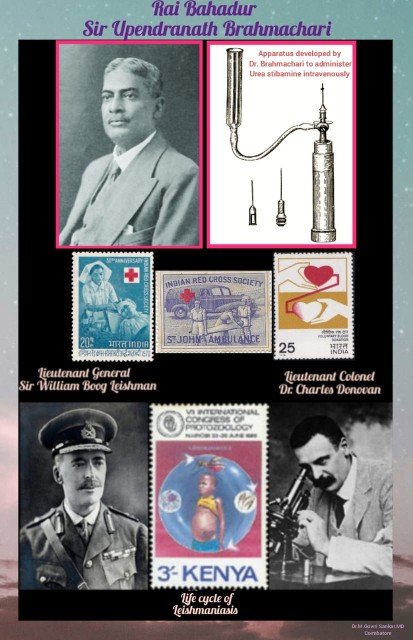 🔹Upendranath Brahmachari was born in a village called Sardanga in West Bengal. His father was a physician in East Indian Railways.
🔹He studied medicine at Calcutta Medical College and while studying, he received Goodeve and Macleod awards for being outstanding in both Medicine and Surgery. He also completed his Ph.D. in 1904 at the University of Calcutta.
🔹As soon as he completed his studies, he joined work in the Dacca Medical School and then he got appointed as a Teacher in Medicine at the Campbell Medical School (now known as Nil Ratan Sircar Medical College and Hospital), Calcutta, where he carried out his research on Kala-azar (Black fever).
🔹During his period, Kala-azar or visceral leishmaniasis was the potentially fatal disease in India .
🔹However, the causative agent of the disease was firstly isolated by the Scottish physician Dr. William Leishman in 1901. He observed the parasite in spleen smears of a soldier, who died of the disease in Dumdum, Calcutta (hence the name Dumdum fever).
🔹Simultaneously, Lieutenant Colonel Prof. Charles Donovan, an Indian born-Irish medical officer had independently found the parasites in peripheral smear of a living kala azar patient, while he was working at Madras Medical College. Hence, it was named as Leishman-Donovan bodies.
🔹Later in the year 1910, Dr. Brahmachari got inspired by the work of German Physician Dr. Paul Ehrlich, who created the drug Salvarsan to treat syphilis.
🔹Subsequently, he carried out his research in a small ill-equipped room in the Campbell Hospital with limited resources available. Although, Dr. Brahmachari was working under such adverse conditions, yet he successfully made monumental discovery of the potent agent against Kala-azar.
🔹Actually, his cure for Kala-azar was the urea salt of Para-amino-phenyl stibnic acid which he named Urea Stibamine, an organic antimonial compound.
🔹He also devised a special apparatus for the intravenous injection of metallic antimony and further published his premier work as “Treatise on Kala-Azar”.
🔹Ultimately, his timely discovery saved the millions of lives in India, particularly in the province of Assam, where several villages were completely depopulated by the devastating disease.
🔹Moreover, he was the first Indian who produced the Pharmaceutical drugs, which were based on Western techniques. His fabulous achievement was further considered a milestone in the field of medicine, when the antibiotics were not born.
🔹A British doctor, H. E. Shortt, had highly praised his invention as “Overnight, a death rate of 90% was transformed into a cure rate of 90%.”
🔹Dr. Brahmachari also had an extraordinary clinical interest, he observed skin eruptions in patients cured of kala-azar. Which was named as Post-Kala- azar Dermal Leishmaniasis or Brahmachari’s Dermal Leishmaniasis.
🔹Additionally, he played an essential role in the foundation of the World’s second Blood Bank in Kolkata by 1939. He was the Chairman of the Blood Transfusion Service of Bengal and the President of St. John Ambulance Association of the Bengal.
🔹Furthermore, he was recognized as the First Indian to become the Chairman of the Managing Body of the Indian Red Cross Society of the Bengal Branch.
🔹Besides, he founded Brahmachari Research Institute at his own residence in Kolkata, which became successful in the fields of both research and manufacture of medicine. He was honored the title of Rai Bahadur and conferred a Knighthood by the British in India.
🔹During the years of his service and even after his retirement, he used to associate with almost all the known scientific and literary organizations at Kolkata.
🔹Indeed, Sir Upendranath Brahmachari played multiple roles in medicine such as a pioneer in Tropical medicine, a prominent medical practitioner and as a teacher. Eventually, his contribution to the society is invaluable.