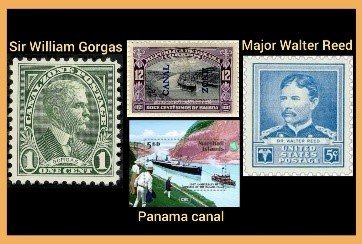 💠Pioneer in the field of Public health & Tropical Medicine

🔸Gorgas pursued his medical studies at Bellevue Medical College, New York and graduated in 1879. After completion of his studies, he joined the Medical Corps U.S Army in 1880.

🔸During his service, unfortunately, he suffered from mild form of Yellow fever. As he was immune, he was appointed as a sanitary officer in Havana, where yellow fever was endemic.

🔸There he started conducting many experiments in the transmission of yellow fever. Meanwhile, Major Walter Reed – a U.S army physician – had proved that Female Aedes mosquito spreads the disease.

🔸Dr. Gorgas was very impressed with the investigation of Dr. Reed. Then Dr. Gorgas successfully eliminated the disease by sanitation measures. Thereby, he became popular among Havana citizens.

🔸Panama canal – the artificial waterway that connects the Atlantic Ocean with the Pacific Ocean – couldn’t be completed by the French because of the high mortality rate among construction workers due to yellow fever and malaria.

🔸Hence, the United States took over the project in 1904 and appointed Dr. Gorgas as the Chief Sanitary Officer.

🔸He was instrumental in the construction of the canal through implementation of proper sanitary programs including the draining of ponds, fumigation, mosquito netting and public water systems. Thereby he prevented illness among thousands of workers involved in the construction projects.

🔸He was broadly recognized for his accomplishment. Consequently, he was elected as President of American Medical Association.

🔸After his retirement in 1918, he continued his service as a Director of the Yellow Fever Control Program under Rockefeller Foundation in South America and Africa, where he was admired as a hero.