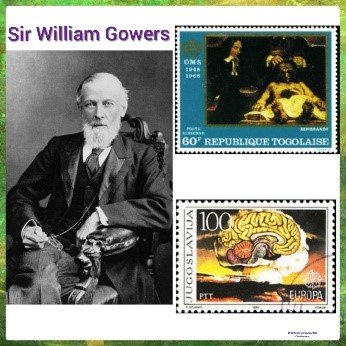 💠The Greatest Clinical Neurologist of all Times

🔹Gowers was born to a bootmaker in London. Unfortunately, he lost his father at the young age of 11 years.

🔹Thereafter, his widowed mother moved to be closer with her relatives in Oxford. By the support of his aunt, he learned French, German and Latin languages.

🔹At his young age, Gowers joined as an apprentice to the village doctor. As he was very much inspired by the field of medicine, he joined to study medicine at the University College Hospital, London and obtained his Doctorate with distinction and received gold medals for his academic efforts in 1870.

🔹After his studies, he began his career as an assistant physician at National Hospital, London for the Relief and Cure for the Paralyzed and Epileptic patients. Later, he moved to University College Hospital in 1872 and served there all his days.

🔹Then, he became the Professor of Clinical Medicine and a Fellow of the Royal College of Physicians in 1879.

🔹In fact, Dr. Gowers was also the man of many inventions, he invented the Hemoglobinometer to measure haemoglobin in the year 1878 and further designed a blood cell counting chamber in which the slide had micrometric squares.

🔹Subsequently, he made a classical description of Epilepsy in 1881 and he was the first to introduce the term KNEE JERK.

🔹In the year 1888, he performed his first successful surgery for a spinal cord tumour with Sir Victor Horsley.

🔹Also, he was the first to recognise the importance of Ophthalmoscope in Neurological Diseases and published a book “A Manual and Atlas of Medical Ophthalmoscopy” with his own illustrations in 1879.

🔹Between 1886 and 1888, his greatest contribution to neurology came in the form of his two volume The Manual of Disease of the Nervous System. This textbook used to be called “The Bible of Neurology” and is a masterpiece illustrated by his own hand.

🔅 Gowers phenomenon – A clinical sign in ischias. On passive dorsiflexion of the foot produces pain along the course of the sciatic nerve.

🔅 Gowers syndrome – Irregular contraction of pupil as an early sign of tabes dorsalis.

🔹Besides, Prof. Gowers was a painter and his paintings were exhibited in Royal Academy of Arts, London.

🔹His marvelous contributions to the field of medicine made his friend Sir William Osler describe Prof. Gowers as “The Ornament of British Medicine.”

The Boot-maker’s Son Glorified as the Victorian Neurologist