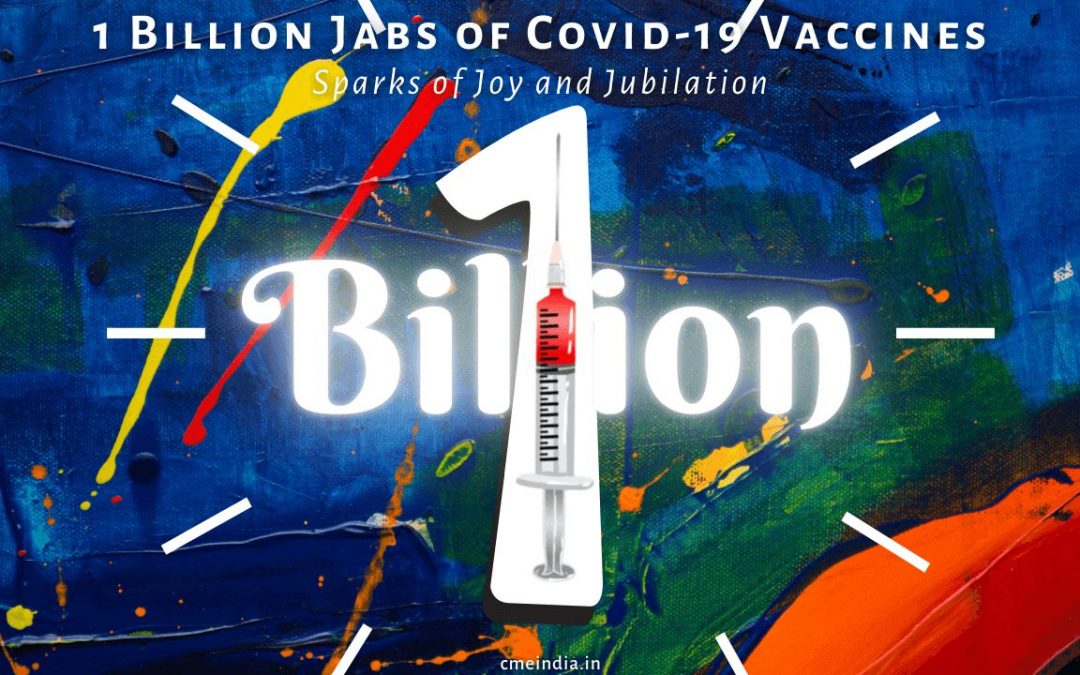 From hoisting the Tricolor on Red Fort to announcements in public places, the Union government has lined up large-scale celebrations as India achieved the milestone of administering 1 billion doses of Covid vaccines.

India launched its Covid-19 vaccination drive on January 16. Of the doses given so far (at 6 PM on the CoWIN dashboard), the proportion of second doses was 28.8 per cent, effectively taking the share of India’s fully vaccinated population to ~30per cent. By now, 74 per cent of the eligible population of India (aged 18 and above) has received their first dose of the Covid vaccine.

India has administered more vaccine doses than any other country in the world apart from China. With no other country having a population of anything close to 500 million, the billion-doses club would consist of only these two countries.

Journey of 1 Billion Jabs the landmark comes in the face of several jerks and hurdles.

So, reaching the 100-crore milestone is a no small achievement.

No Complacency, Challenges Ahead

Some people born with negativity, would never praise India

Experts who steered the world’s largest vaccination journey now lift the curtain from backstage preparations. They also unfold the future plans of Journey.

Q. In 2022, will we still be wearing masks, even if everybody was inoculated?

A. The mask will be the last thing to go. Hope that we will have a much brighter 2022.

Q. WHO panel has recommended administering a booster dose. Is India thinking on those lines?

A. There are certain points about booster doses – antibody levels, cellular immunity, mucosal immunity, many of these abilities which cannot be measured as well. A few countries have approved booster doses, mainly for immunocompromised people or people suffering from various diseases. With the current status of the pandemic in India, with a positivity rate of less than 2 percent, if one looks at the statistical significance of requiring a booster dose, it is probably not justified at the moment.

Q. Drive is no more marred by hesitancy. How things have changed?

A. Those who have not been connected till now, it is not necessarily hesitancy. It’s Govt’s duty to reach out to them directly for vaccination.

From Requesting to Persuading

Future Vaccination Journey will be in a mission mode. The government is going to locate people Vaccinate them using an army of health care workers.

This is our mission:

1. Those who have not yet received the first dose should receive it.

2. Those who have received the first dose must take the second one. And that’s the challenge we will work towards.

Q. Now that India has vaccines in surplus, what percentage of vaccine doses does the government plans to export?

A. Govt policy is to balance our own requirements and then offer the additional supplies to the WHO COVAX system and other nations. India will play a very important role in vaccinating a very vast part of humanity. And that will be the noble credit that India should rightfully get and should work for. A large number of vaccines will be available next year for the rest of the world.

Q. How has the vaccine journey been through the CoWIN lens?

A. CoWIN is a very robust platform. No platform in the world has accelerated to this big number in such a short time.

Q. When CoWIN was launched, there were apprehensions whether it would reach rural India. How did the government bridge the digital divide?

A. CoWIN is a people-centric, inclusive and transparent platform that reduces and eliminates information asymmetry. CoWIN has managed to become a household word now in a very short period. We hear these phrases in every home. “CoWIN pe register kar dia kya”, “CoWIN pe dekho, vaccination slot khali hai kya?”.

Q. What has been the biggest challenge for CoWIN?

A. Data Entry Errors! In many areas, operators were committing data entry errors, and CoWIN was being blamed for it. For example, I got my first jab using my mobile phone and my second jab using my wife’s. So, the system treated it as two first jabs, and people started saying they had got two first jab certificates. CoWIN is a software. There is a principle called ‘GIGO’, Garbage In, Garbage Out. So, if you feed the wrong data, the false result will come out.

Q. What was the biggest CoWin challenge?

A. Govt wanted to ensure not even a single jab in this country was administered without recording it on some digital platform. Otherwise, there would have been chaos. How many people would have known that their first dose was, say X, and their second dose had to be X as well, with a Y-week gap? All these factors required a Robust but Handy platform.

Q. How can CoWIN help India to build digital infrastructure for the public health system?

A. CoWIN can be repurposed for a number of things like universal immunization programme, blood banks, organ donations etc.

Q. When will vaccinations for children begin?

A. Like adults, Govt plans to immunize country’s nearly 44 crore children in a very short period of time. Govt is preparing a list of commodities for children who are at three to seven times higher risk of severe disease. Children with these comorbidities will be prioritized. As soon as their immunization is complete, healthy children will be taken up. Campaign for healthy children more than two years and above will start in the first quarter of 2022. The preparation for today started in February 2020.