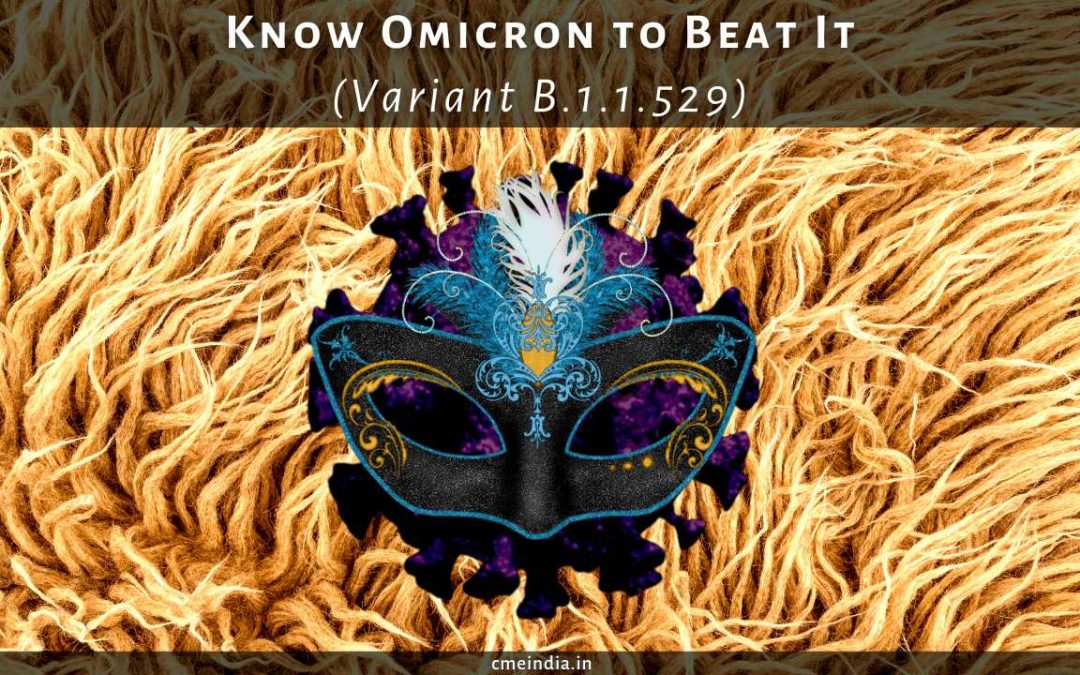 Arrives the most heavily mutated version of the Coronavirus – How much to panic? What are the ways ahead?

“I would not be surprised if it is [in the US], we have not detected it yet, but when you have a virus that is showing this degree of transmissibility and you’re having travel-related cases they’ve noted in other places already, when you have a virus like this, it almost invariably is going to go all over.” – Fauci, the CDC director

“More research is needed to determine whether the variant is more contagious, whether it causes more severe disease, and whether these mutations have some worrying characteristics.” – Maria Van Kerkhove, WHO’s technical lead

At present, relatively little is known about Omicron. It has the heaviest mutations till date. Scientists fear that this could make it more infectious and less susceptible to vaccines. It is also unclear whether the variant is more transmissible than Delta? But worth pondering — neither of these effects is yet established. All we know comes from hints from computer modelling that B.1.1.529 could dodge immunity conferred by another component of the immune system called T cells.

Most confirmed cases of the variant are contained to southern African countries. But worries that Omicron could have spread more widely before scientists discovered it, is a genuine one.

When was it first detected?

What are the mutations that characterize this variant?

Parameters of a deadly variant and where does Omicron fit into these parameters?

Currently available tests (RTPCR) continue to detect the new variant. However, there is S Gene deletion in this variant. While large number of Diagnostic kits in India detect N gene and RdRp gene. Some test kits across the world additionally detect S gene which if not detected can serve as crude test indicative of Omicron infection. Rapid Antigen tests detect S gene so it may not be able to detect the new variant.

Though there are not many drugs effective against the coronavirus but currently available Experimental antiviral pills – such as Pfizer Inc’s (PFE.N) Paxlovid and Merck & Co Inc’s (MRK.N) molnupiravir – target parts of the virus that are not changed in Omicron. Rather these drugs could become even more important if vaccine-induced and natural immunity are threatened.

The new variant has over 30 mutations in Spike proteins of the virus. Most present vaccines namely Covishield and mRNA Vaccines target spike proteins. It is possible that changing spike proteins might override the immunity provided by these vaccines. However, killed virus vaccines as Covaxin target additional genes like N Gene which is not affected by present mutations. In addition, all Covid vaccines stimulate Cell Mediated Immunity which should remain functional.

It is noteworthy what the mutations would mean

It is all theoretical and based on experience of past mutations of SARS-CoV-2 rather than actual lab tests. (Re)infection by overriding the immunity of past natural SARS-CoV-2 infection or following Covid vaccination is yet to be established for Omicron. And it may take several weeks to find the same. However, Omicron’s mutations may render certain monoclonal COVID-19 treatments e.g., Regenron – ineffective.

“No unusual symptoms” have been reported following infection with the B.1.1.529 variant. It has highlighted that, as with other infectious variants such as Delta, some individuals are also asymptomatic.

Why WHO classified it as VOC so early?

How far has it spread?

How Countries have responded?

Why New variants are coming from Africa?

Do number of mutations make a variant more deadly?

What can I do to protect myself?

What can Governments do?

Variants will keep knocking, it is for people to permit them entry or not.

World Health Organisation (WHO) identified the variant of concern, found in South Africa, as Omicron. The virus is feared to be more dangerous and has been seen to show more mutations.

“It presents mild disease with symptoms being sore muscles and tiredness for a day or two not feeling well. So far, we have detected that those infected do not suffer loss of taste or smell. They might have a slight cough. There are no prominent symptoms. Of those infected some are currently being treated at home,” – Angelique Coetzee, chairwoman of South African Medical Association (SAMA).

South Africa on Sunday said that it was being punished for reporting the virus.