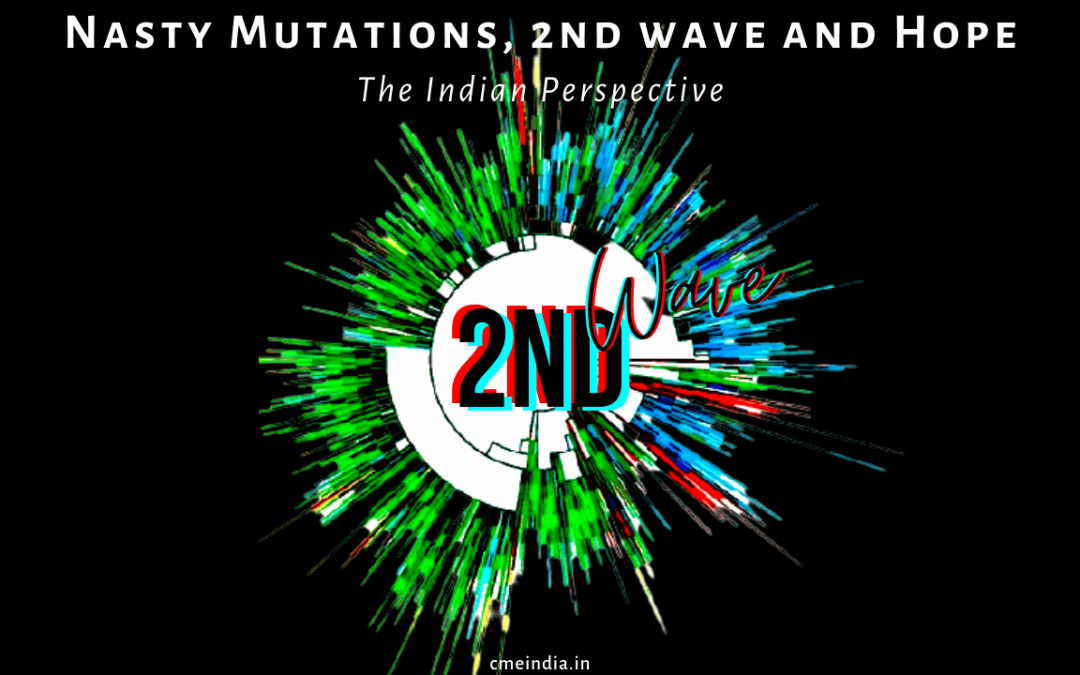 A “double mutant” variant of coronavirus has been in India. At present Officials are checking if the variant, where two mutations come together in the same virus, may be more infectious or less affected by vaccines.

HOPE: Mostly it is human behaviour that will drive the second wave. It is our hope that we will make responsible choices.

Five Nasty Mutations of Second Wave, and their properties

How second wave is different from First Peak?

1. 💹 Steep and Fast Number of New Cases rising faster. Case doubling time in last year was 23 days while this year it is less than 10 days. Last time, in July and August 2020 it took 23 days for India to move from 30,000 cases/day to 60,000. While in this wave just ten days ago, this daily count of cases was less than 30,000. Which jumped to 62000 new cases on 26 March 2021 in less than 10 days . *Cases are rising steeply despite the fact that, society has lesser number of susceptible people because of previous sub clinical exposure, mitigation and vaccination*. Probably number of Vulnerable matter and *Corona seems to spare none*. Complacency in following Covid Appropriate behavior could be the reason.

2. High concentration of cases in a few states is another remarkable feature of this second wave. Maharashtra is contributing more than 60 per cent of the cases every day in Second Wave. While it contributed no more than 22% total cases in previous peak.

Though cases suddenly up 3.7 times in Maharashtra from February levels, they are up 2.9 times in Gujarat, 2.9 times in Andhra Pradesh, 3 times in Madhya Pradesh and 4.9 times in Punjab. But as the baseline number of cases in February were few in these states they are not catching eye.

3. Sequential Second Wave – Gripping states one after the other

Also possible is that different states might peak at different times as already happened earlier. Kerala had been reporting very large number of cases when the rest of the country had fallen silent. When Maharashtra started rising again, Kerala began to decline.

We could see this happening in other states as well. It is possible that Maharashtra begins to show a decline in a few weeks’ time but by then the action might shift to Andhra Pradesh, or Karnataka or Tamil Nadu. Still later, Bihar or Uttar Pradesh or West Bengal might begin their second wave when other states go in a decline. After all people in other more populous states appear to have no special immunity and Corona seems to spare none.

The weekly case fatality rate for Maharashtra from February 15 to 21 was 0.7%, which declined to 0.32% in the last six days between March 15 and March 20. In the same period, the weekly cases have tripled which might have changed statistics and

it may be too early to say as death rates lag about 2 weeks behind new cases. But Case fatality Rate in Kerala too has been around 0.4% during second wave.

But these are just rates and figures. Total number of human beings dying increase as more population gets affected.

5. How long will it last? Steep rise Fast Wane off Second wave would last for a shorter period of time, though there is no indication that this second wave is coming to an end anytime soon. It could again happen all of a sudden, like last time, when the numbers, rather inexplicably, had begun to come down after reaching 98,000 cases a day.

With more and more people getting vaccinated, and a large proportion having already been infected, the expectation is that the wave should wane off faster than the first.

6. Prediction based on Global Experience

Global Covid-19 experience shows the second wave much higher in intensity than the first wave.

There are models based on European experience that the duration of the second Covid-19 wave might last up to 100 days starting from Feb 15, and the second wave, could last until the end of May. It could see an addition of 25 lakh cases if current trends are taken into consideration.

But Corona seems to be baffling all. Hindsight may not always give correct foresight. Wear Mask and Get Vaccinated.

What is a Variant?

What is a Strain?

What is Variant of Concern (VoC)?

Can we stop mutation of Sars Cov-2 Virus?

Second wave in India is due to Mutant Strains or still original Wuhan Virus predominates?

How many samples have been tested?

How many cases of VoC found?

Cases of Mutations so far in India?

Are mutations confined to one state?

How can we Control the Second Wave?

Which Vaccines are effective against New Strains?

“Double-variant” had been found in 20% of the cases in Maharashtra, which has seen a huge spike in reported infections. One suspicion is that this variant is the cause of India’s second wave of infections. I would say no, 80% of the samples we have sequenced don’t have this combination of mutants. This mutant has been linked to only 230 cases in Maharashtra of the several thousand samples sequenced.” – Dr Rakesh Mishra, director of the Hyderabad-based Centre for Cellular and Molecular Biology (CCMB) (As told to Soutik Biswas).