The Surge of COVID-19 in China – A Cause of Concern for Indians? 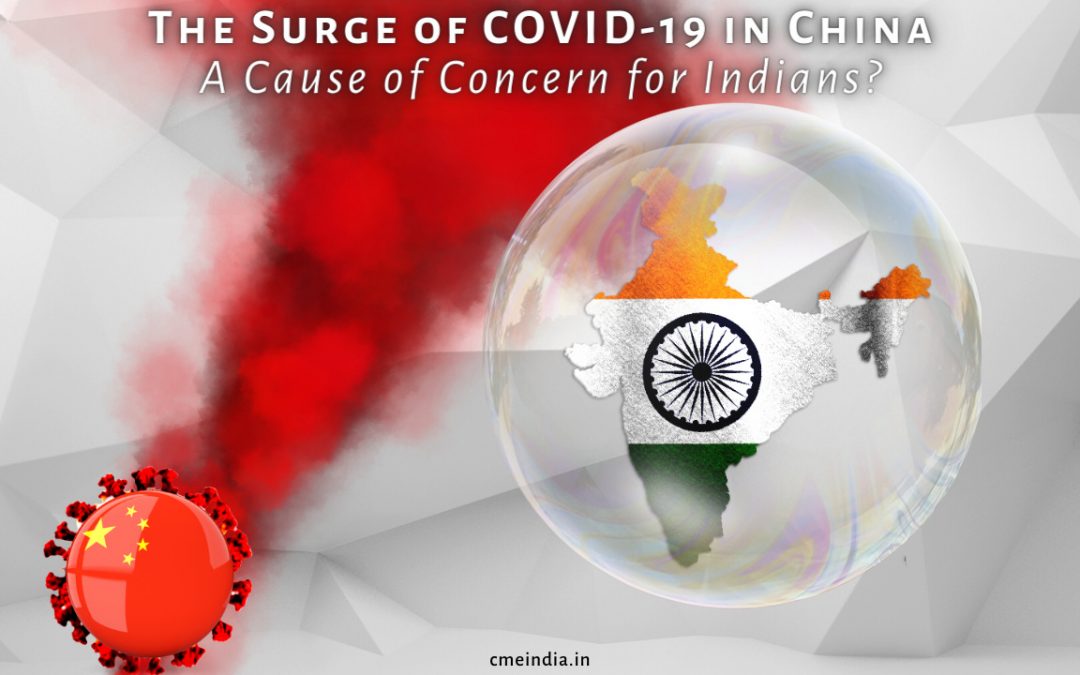 The recent unprecedented surge in Covid cases in China has sent Alarm Bells ringing worldwide. Govt of India has too has expressed concerns. Fear and Panic seem to be driving the masses. Govt acting with an abundance of caution can be justified, but there seems little cause for worry for vaccinated healthy citizens in India. But How? Let’s analyze.

1. Widespread infection by Sars-CoV-2 during the second wave of Covid-19 in India has given solid immunity to Indians.

2. As a fundamental principle of science, Immunity imparted through natural infection by live Sars-CoV-2 during the Pandemic is likely to be more robust and longer lasting.

3. Vaccines used in India are proving to be efficacious. Results of phase IV (post-marketing surveillance), i.e., low hospital occupancy/ less frequent complications/ fewer cases and lower mortality rates during the 3rd wave and afterward, are testimony to the same.

4. India opened up Vaccination of masses after April-May 2021, which coincided with the second Wave of Covid-19. Most people received their vaccine after the Second wave.  Hence, the timing of even the First and Second doses of the primary series of vaccination by default (not by design) served as the Second dose and Booster dose, respectively, imparting robust immunity to a large section of the Indian population. So it doesn’t matter if we gave enough 3rd dose boosters.

6. Huge workforce of motivated Asha Workers was able to take the Vaccination to the farthest and most difficult-to-tread nooks and corners of Indian villages despite immense weather and terrain challenges.

7. Fear factor generated by the ferocious Second wave sensitized the masses towards much-needed vaccination, further facilitated by Govt of India in the form of Free vaccines. In addition, repeated multimedia and mass media campaigns made the politically motivated anti-vaxxers infructuous.

9. A simple look at the Genomics of Sars-Cov-2 during the First and Second waves shows the same Virus Variant sequentially storming most countries worldwide. But since the discovery of Omicron, the genomic curves of many regions were reigned by different variants with differing infection rates and severity. The phenomenon could be attributed to specific vaccines used in different regions. USA, Europe, and several other nations relied upon mRNA vaccines while India largely banked upon Serum’s vector-based vaccine and, to some extent, killed virus vaccine by Bharat Biotech.

10. mRNA vaccines code for a particular epitope of the virus and hence produce dissimilar immunity than Vector-based vaccines. The immune response generated by Indian Vaccines could thwart specific variants more effectively. Possibly, therefore, BA.4 and BA. 5, which created ripples in the west, couldn’t take over India. There can be several confounders, like ethnic variations, to this process.

11. It is feared that India might witness a surge in cases coming from China following the abolition of Zero-Covid there. However, it needs to be understood that the immune conditions of the population are different in China and India. Indian population has a robust immunity driven by exposure during the second wave followed by effective vaccines, *while the Chinese citizens are still behaving like a naive population in the wake of poorly efficacious vaccines and little infection of masses courtesy Zero-Covid.  China is now going through the Second Wave of Covid-19. 40% of the Chinese population is already infected. The rest of the population is yet to get natural immunity.

How is New Sub-Variant in China likely to behave?

It has been the prevailing variant since October 2022. It had enough time and opportunities to travel to India and cause harm, but fortunately, little so far. But what has been containing it so far?

BA.1 and BA.2 sub-variants of Omicron were the main drivers of the January 2022 wave in India.  The sub-variants BA.4 and BA.5 that followed could never take over Indian Virosphere despite being dominant strains in Europe and US.

As per data from India’s national SARS-CoV-2 genome sequencing network, BA.5 lineages accounted for only 2.5% of cases on November 22. On similar lines, India saw very few cases of BF.7

Laboratory studies suggest nearly 4.4 times higher neutralization resistance for BF.7 than the original Wuhan Variant, as reported in a study published by the journal Cell and Microbe, suggesting a higher likelihood of the variant spreading in a population and replacing other variants. However, on the ground experiences were much milder in USA.

BF.7 accounted only for nearly 5% of US cases and 7.26% of UK cases on October 22. Though scientists in the West were watching the variant closely; however, there was no dramatic increase in the number of cases or hospitalizations in these nations.

India has so far followed suit and is likely to continue.

13. Though four cases have been detected in India in the last couple of days, it can be hoped that, in all probability, newer Chinese variants will not be able to evade the immunity imparted by their predecessor from Wuhan as has been the case till now.  Nevertheless, unvaccinated should go for immediate vaccination, and people with comorbidities and immunocompromised should watch out and avoid unnecessary exposures; better go for a fresh Booster.

There is no need to panic.

There is a viral post circulating about XBB variant with very severe consequences and 5 times more infectious.

Latest WHO position statement of 22nd October is as follows: