Why Delta was a “smarter thief than Omicron?” 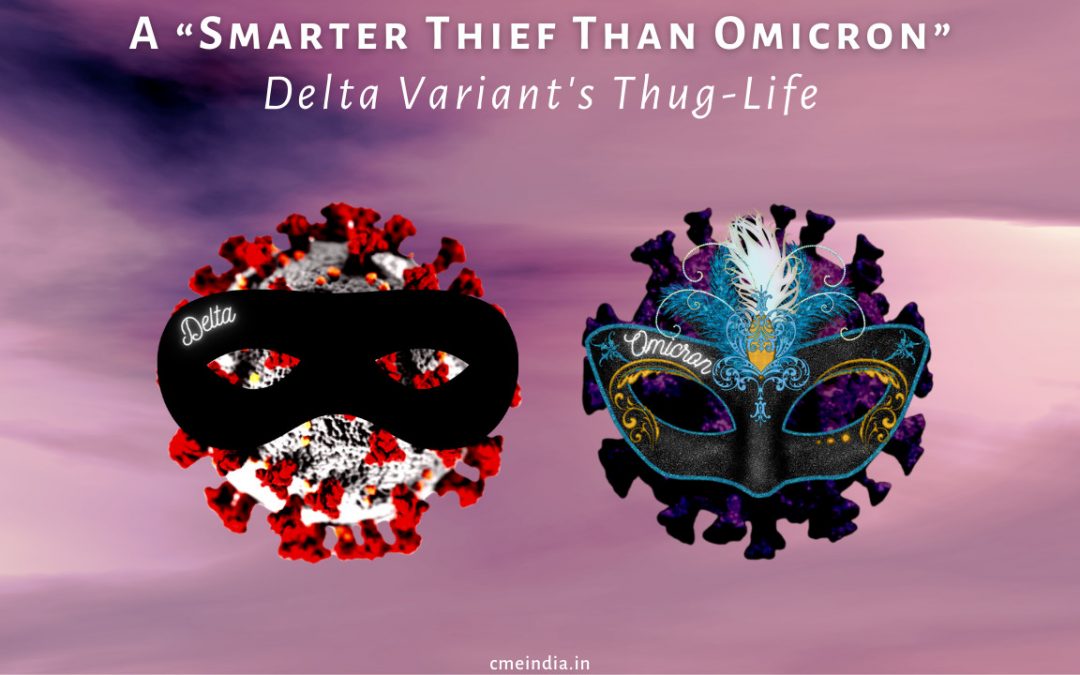 Omicron is weaker in its stealth ability than delta.

Stealth refers to ability to infect large numbers of cells without awakening the body’s immune response. Somewhat like thieves operating in the dark after turning burglar alarms off. Omicron’s “ability to turn the cell’s burglar alarm off” is lower than that of Delta.

New study shows that the mutations in the Omicron variant do not cause substantial changes in the drug sensitivity profiles of the viruses.

Total Omicron cases in India: Tip of iceberg data only

Scan this report of rt PCR

One pilot series confirms Omicron is already widespread in the community

What is the STEALTH STORY of Omicron vs Delta?

Note: These are lab studies. Observations on cells in culture do not necessarily reflect what happens in the human body. Nevertheless, we need to look at such elegant research studies from such people of competence, but at the same time not to over-read or generalise. Evidence is like a painting, it is completed bit by bit.

BA3 is less common lineage. Initially it was only BA1, lately BA2 is detected in many places including India. Approx. 80 % of Kolkata is of BA2 lineage. In upper Assam, also mainly BA2 as per ICMR Dibrugarh (they have a method to detect it, which is validated).

BA1 and BA3 has S gene drop or failure but BA2 has S gene many has expressed.

If S gene drop technique is used to detect Omicron, then it will not detect BA2, thereby making it difficult to distinguish from Alpha variant. So, need methods other than SGDT to detect Omicron perfectly.

Questions based on above:

Dr. Rajneesh Tyagi, Physician, Noida: Could be due to the fact that most of us were exposed to delta and many have partial immunity against it.

Dr. Chandrakar Tarke, Pulmonologist, Hyderabad: The BA.2 variant of Omicron will have S gene present. Majority being detected now are BA.2 as per data from Calcutta. S gene presence in the present scenario is mostly due to BA.2 variant of omicron rather than Delta. The recent GHMC Hyderabad data where gene sequencing was done showed 87 percent omicron.

Dr. P. R. Parthsarathy, Chest Physician, Chennai: May be one has to go by clinical judgement .in mild cases there will not be any problem even if S gene is present as long as the pt is being closely monitored for worsening of the symptoms.

Dr. Anand Malani, MD, Sangli: As per Government figures based on genetic sequencing 50-60 percent still Delta in Maharashtra. If S gene detected in Omicron too then there remains no way to differentiate. Gene sequencing takes time. Monoclonal decision cannot wait for that. Delta patients should not miss out the timeframe for monoclonal. Any other reliable way to differentiate? Clinically possible to some extent but accuracy will be low.

Dr. Sourav Maiti, Neurosciences, Kolkata: In Kolkata, we are getting mix up of Omicron and Delta in majority… along with a few cases (~15%) variants other than the VOCs. Majority cases seem mild to moderate.

Dr. Chandrakar Tarke, Pulmonologist, Hyderabad: Some kits can distinguish if it is ba 2.1 variant or not. Omisure is one such test. Some people are using it.

Dr. Anand Malani, MD, Sangli: BA.1 – In most of India. BA.2 – Stealth Variant of Omicron – No SGTF. In some parts. Not yet reported in Maharashtra. BA.3 – Not yet in India. One more question: If S gene target detected in BA.2 does it mean less mutated Spike protein? And is it amenable to Cocktail antibodies? At least theoretically. Unlikely that any trial or study is available. It’s confusing and clinically challenging!