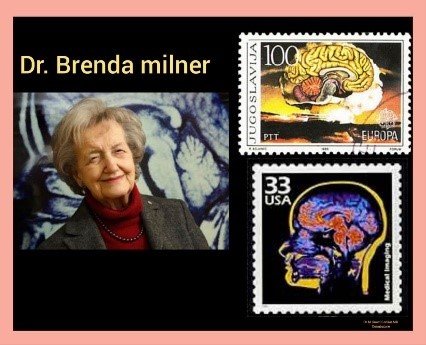 🔸Milner was born in a musically talented family. She completed her degree in Experimental Psychology at the University of Cambridge and did her Ph.D. from McGill University in 1952.

🔸Then she started her career at Montreal Neurological Institute. Through incredible discoveries Milner contributed significantly to the field of neuropsychology.

🔸In 1954, she published her experimental work on “Intellectual function of the temporal lobe.”

🔸Additionally, she published about the “Loss of recent memory after bilateral hippocampal lesions” in 1957.

🔸For nearly three decades, she studied a patient called “HM,” who had bilateral medial temporal lobe, amygdala & hippocampus removed for cure of his intractable epilepsy.

🔸Dr. Milner noticed that HM could not create new memories, as whenever he saw her, he thought it was the first time (lost his ability to convert short-term memory into long-term memory).

🔸With this experiment, Milner discovered that there are two systems in the brain responsible for storing memories – Explicit or Declarative memory & Implicit or Procedural memory.

🔸Consequently, she concluded that hippocampus is responsible for Explicit memory, which stores names, faces and new experiences, whereas the implicit memory do not involve hippocampus and are encoded in cerebellum, putamen, caudate nucleus and the motor cortex, all of which are involved in motor skills such as driving or playing the piano.

🔸This study was considered as the Greatest Milestones in the History of Neuroscience.

🔸Furthermore, she made contributions to the understanding of the role of frontal lobes in memory processing in the area of organizing information.

🔸Moreover, her passion in the field of Neuro psychology led her to publish more than 100 scientific papers and to hold more than 20 honorary degrees.

🔸Eventually, Dr. Milner was recognized as one of the greatest neuroscientists of 20th century. She declared that “Curiosity Must Keep Us Going.“

A Scientist Who Unlocked the Mysteries of Memory