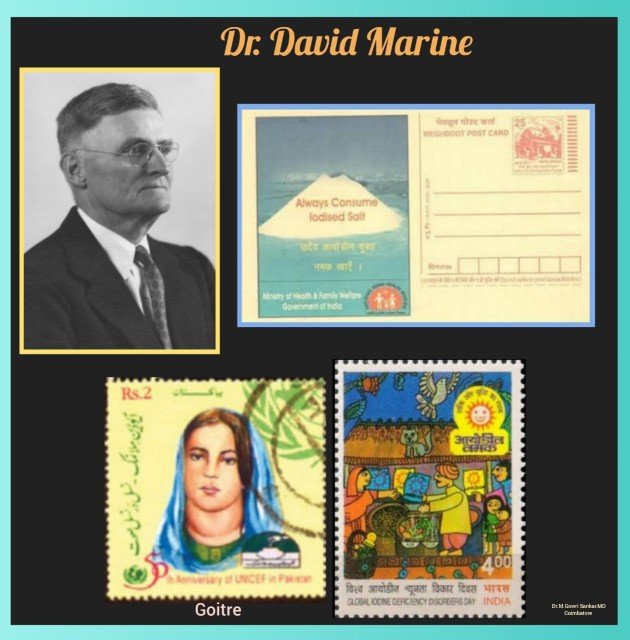 🔹Marine studied medicine and graduated from Johns Hopkins Medical School in 1905. Then he worked in two different places – Cleveland and Ohio, which was an epicenter of endemic goiter (affected both humans and animals).
🔹Thereafter, he got promoted to as Chairman of Pathology and Director of Research Laboratories in Montefiore Hospital in 1920.
🔹There he began his Seminal Epidemiologic Study, related to the functions and regulation of the thyroid gland.
🔹Subsequently, he had conducted his trial, with his assistant O. P. Kimball, for testing the effect of Iodide in a large group of schoolgirls in Ohio and proved that it greatly reduced the size of the goitre.
🔹Thereby, Dr. Marine proposed that the endemic goiter was occurring due to iodine deficiency and the same could be reversed or prevented by iodine supplementation.
🔹Further, his results clearly educated the importance of iodine in the diet.
🔹Thereupon, Dr. David. M. Cowie, an American Pediatrician promoted the production of Iodized Table Salt, from May 1,1924 onwards in United States as a dietary supplement to reduce the incidence of goitre.
🔹His successful introduction of iodine supplementation resulted in the elimination of iodine deficiency diseases, including endemic cretinism.
🔹Ultimately, Dr. Marine’s research and effective teachings of Goitre prevention has made it in practice all over the world.
🔹Consequently, Dr. Marine has been called “The Nestor of Thyroidology,” where Nestor is a masculine figure from Greek mythology who represents a wise and experienced counselor. Moreover, he has been considered one of the noble persons who carried the light and carefully handed it over to the others.

A Milestone Researcher in Thyroid