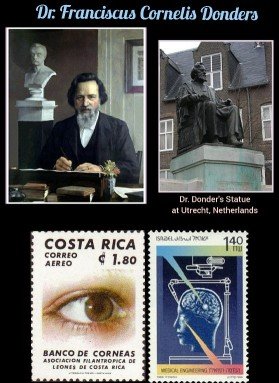 💠One of the Primary Founder of Scientific Ophthalmology

🔹Donders was born in Netherlands and studied medicine at Medical School in Utrecht.

🔹Initially, he was appointed as a teacher of anatomy and physiology at the University of Utrecht and at the age of 29, he became a Professor Extraordinarius in the same institute.

🔹In fact, he was one of the few Dutch physicians with an International reputation. Later, he became one of the pioneers of Ophthalmology by establishing the first eye hospital in the Netherlands in 1858 and devoted himself to clinical ophthalmology.

🔹Also, he was one of the first who used Von Helmholtz Ophthalmoscope in 1850.

🔹Further, he introduced Prismatic and Cylindrical lenses to treat astigmatism in 1860.

🔹Afterwards, he invented the Impression Tonometer to measure Intraocular Pressure in 1862.

🔹In the year 1860, he did an extensive work in disorders of accommodation and refraction and introduced the practice of methodological order in testing refraction.

🔹Apart from that, Dr. Donders contributed himself to Neurophysiology by working on muscular activity, blood flow movement in the brain and speech physiology. Thereby, he paved the way for modern neuroscience.

🔹Furthermore, he involved himself in developing methods to measure the duration of mental processes in controlled experimental situations and thereby he was considered a Founding Father of Mental Chronometry.

🔹Finally, he conducted the cognitive psychological experiment by measuring the mental reaction time between the presence of sensory stimulus and persons response to the stimulus.

The Pathfinder of Psychology and Ophthalmology