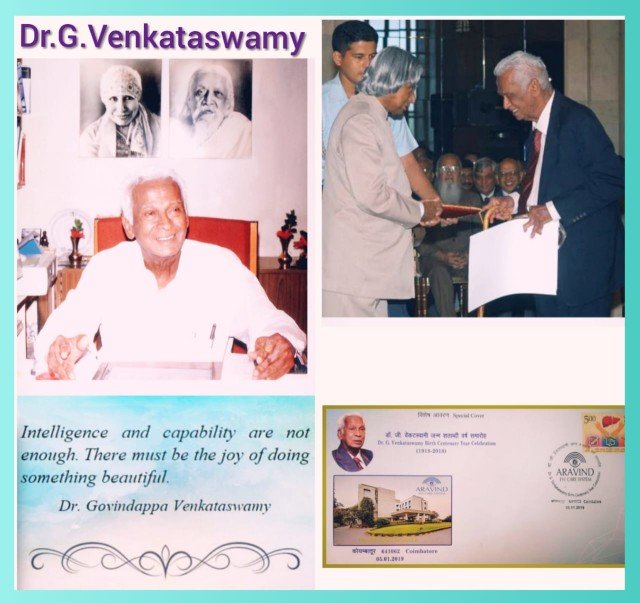 🔹Venkataswamy was born in a farmer’s family in a small village called Vadamalapuram, Tamil Nadu. As he resided in a village, he had to walk two kilometers daily for schooling.

🔹During his young days and throughout his life, he was deeply influenced by the teachings of Mahatma Gandhi, Swami Vivekananda, and Sri Aurobindo.
🔹His village had no doctors so unfortunately he lost three of his cousins due to pregnancy-related complications. This painful situations had aroused him to become a doctor.
🔹He studied medicine at Stanley Medical College, Chennai. After his studies, he joined at Indian Army Medical Service to practice obstetrics. But unfortunately, he suffered rheumatoid arthritis, which attacked his hands and the “Pain became a constant companion of his life.”
🔹Because of his suffering, he was not allowed to practice in army service. But he did not give up. Inspite of his severe sufferings, he choose to study Ophthalmology at Government Ophthalmic Hospital, Chennai.
🔹Subsequently, he joined the State government service and then became a Head of the Department of Ophthalmology at the Government Medical College, Madurai. There he served for about 20 years.
🔹In fact, he was affectionately known as “Dr. V.” He was considered a legend in the community of ophthalmologists and he was a pioneer in conducting Mass Free Eye Camps since early 1970.
🔹He further initiated the eye rehabilitation centre for blinds and ophthalmic assistant training programs. He has personally performed around one hundred thousand successful eye surgeries despite of his crippled fingers.
🔹Considering the blindness prevention, he met the Prime Minister Indira Gandhi and insisted to launch India’s National Program for the Control of Blindness.
🔹After his retirement in the year 1976, he founded the well-famous “Aravind Eye Hospital” along with his four siblings and their spouses and established his first branch in Madurai.
🔹It is purely a non-profit organization that provides Eye Care free of cost to two third of its patients from the revenue generated from one-third of patients. This is popularly called the “Aravind model” which is now being followed not only in developing countries but also in developed countries to take care of needy patients.
🔹Furthermore, he founded the Aurolab, which is a manufacturing unit that offers the intraocular lens at one-tenth of international prices and making it affordable for developing countries.
🔹It has now extended it’s manufacturing into ophthalmic pharmaceuticals, instruments and equipment.
🔹His extraordinary contributions was finally honoured with many awards including a Padma Shri award from the Government of India in 1973, the Helen Keller International Award in 1987, and the prestigious Dr. B. C. Roy award in 2001.
🔹Dr. V had dedicated his life to eliminate needless blindness. Over the years, the organization has evolved into the Aravind Eye Care System. It’s a system dedicated to compassionate service that acts as a model for other eye care providers around the world.
🔹Today, Aravind Eye Hospital has nearly 4,000 beds performing over 2,00,000 eye surgeries each year, with 70% of patients paying little or nothing.
🔹In his days, Dr. V used to state – “Do not Limit Yourself to Small Things,” “If You Can Do Something, Then You Must Go Ahead and Do It.”

An Ophthalmologist Who Saved Millions of Eyes