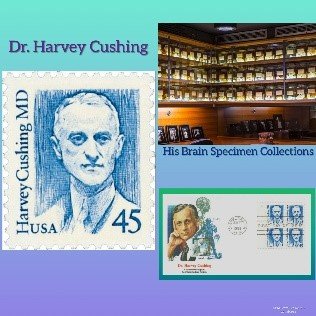 🔹Cushing was born in a physician family. In fact, his family raised physicians for three generations. As he got inspired by his physician father, he studied medicine at Harvard Medical School and received his medical degree in 1895.

🔹After completing his studies, he started working under the world-famous pioneering surgeon Prof. William Stewart Halsted at the Johns Hopkins Hospital, Baltimore. There he formed a long-lasting friendship with Sir William Osler.

🔹He further worked under Dr. Theodor Kocher at Bern and then with Dr. Charles Sherrington at Liverpool.

🔹During his time with Kocher, he was the first to describe the Cushing reflex & Cushing’s triad in 1901 and along with Sherrington, he mapped the motor cortex of apes.

🔹Subsequently, Dr. Cushing identified various types of brain tumours and accordingly prepared the advanced operating procedures and techniques, which became the fundamental for neurosurgery. Also, he performed more than 2000 intracerebral tumors during his long career.

🔹Moreover, he was the first to describe the pituitary adenoma with Cushing’s Disease or Cushing’s Syndrome in 1912. Thereby, he became one of the Founders of Endocrinology.

🔹He then coined the term Meningioma.

🔹Also, he was the first to introduce BP apparatus in United States. He then emphasized the need of BP measurement during surgery and post-operatively.

🔹Additionally, he had an illustrative career and published more than 300 articles and 13 books.

🔹In the year 1926, he published an autobiography of the Founding Father of Modern Medicine – Sir William Osler. He received the Pulitzer Prize for the same.

🔹In fact, he had a habit of reading History of Medicine all his days. His all-brain specimen – around 500 collections – have displayed at Yale Medical School Library, New Haven.

🔹His majestic work earned him the recognition of World’s First Successful Brain Surgeon in the early 20th century and a world leader in his field. Thus, he was given the title of The Father of Modern Neurological Surgery.