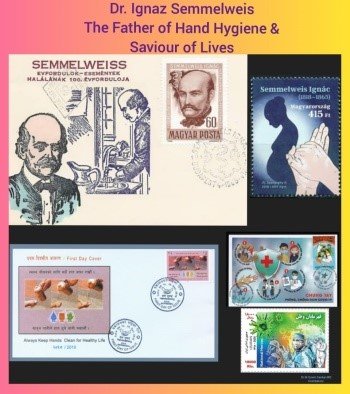 🔸Semmelweis studied medicine in Vienna and graduated in 1844.

🔸After his studies, he joined work as an Assistant to the Professor in the maternity clinic at Vienna General Hospital.

🔸While working, he noticed that many women in maternity ward were dying from puerperal, fever which was generally called as Childbed Fever.

🔸He further observed that the women who were delivered by physicians and medical students had a high rate of puerperal fever than the women delivered by midwives.

🔸Subsequently, he did a Case-control analysis and concluded that the high rate of infection seen among women delivered by physicians and medical students was due to simultaneous handling of corpses during autopsies and attending the pregnant women. Whereas the midwives were not doing as such.

🔸Therefore, he pioneered Antiseptic procedures, which emphasized compulsory handwashing with chlorinated lime solutions before examining the women in labour.

🔸As a result, he drastically reduced the incidence of fatal puerperal sepsis and the death rate of women.

🔸However, his statement on cleanliness was largely ignored and rejected. Ultimately, he was criticized for his work and also got dismissed from hospital. Hence he felt dejected and became mentally ill. Then he got admitted in mental asylum and unfortunately died in 14 days.

🔸His landmark discovery during 1850s was not accepted by the medical profession. Whereas the same earned wide spread acceptance after Louis Pasteur’s Germ Theory of Diseases in the 1860s.

🔸Eventually, Dr. Ignaz Semmelweis was recognized as “The Father of Hand Hygiene” and really saved the lives by three effective words –“Wash Your Hands.”

The Physician Who Emphasized Hand Washing and Saved Lives