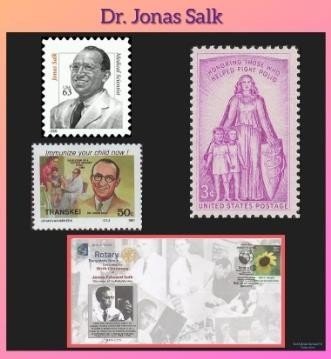 🔸Salk studied medicine at the New York University School of Medicine and did his Fellowship along with his mentor Dr. Thomas Francis at the University of Michigan in 1940’s.

🔸After the completion of his studies, he wanted to help the mankind through research rather than practicing as a physician.

🔸During his period, polio was severely threatening the public health in the world. In U.S, in 1952, it caused the worst outbreak in the nations history.

🔸The President of United States Franklin D. Roosevelt had contracted paralytic illness and his legs became permanently paralysed. At that time, he founded the National Foundation for Infantile Paralysis. Later, it was lead to the development of polio vaccine.

🔸In the meantime, Dr. Salk was appointed in the University of Pittsburgh school of medicine. He started his research under the foundation along with a dedicated team for seven continuous years. He successfully discovered and developed the polio vaccine after consistent effort.

🔸He further conducted a large-scale human trail to test his Injectable Inactivated Polio Vaccine. The vaccine’s success was announced on April 12,1955 and Dr. Salk was hailed as a miracle worker.

🔸At one point in time, he was been asked to declare “who owned the patent?” He strongly replied as follows “Well… I would say there is no patent. Could you patent the sun?”

🔸Moreover, he found the Salk Institute of Biological Studies at California in 1960. Today, it’s acts as a centre for medical and scientific research.

A Physician with Passion & Vision