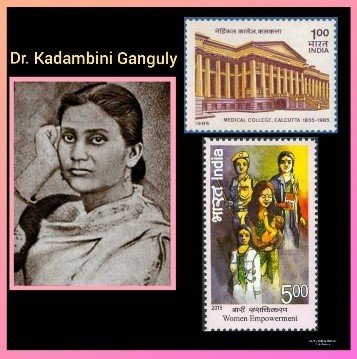 🔹During the childhood, Kadambini was highly inspired by her father, who was a headmaster by profession and best known as a proponent of Brahmo Samaj. Also, he was a founder of Mahila Samiti, India’s First Women’s Organisation established in 1863.

🔹In 1882, she graduated as one of the first two women graduates of the country and in the entire British empire. She completed her Bachelor Degree in Arts from the University of Calcutta.

🔹Then she got married to Dwaraknath Ganguly, who was a prominent Brahmo Samaj leader.

🔹He kept encouraging her to study medicine. In spite of her name being listed in the merit list in Calcutta Medical College, she was not allowed to study medicine because there was no history of Indian women studying there.

🔹After a great struggle, she completed her medical studies and was recognized as one of the First Indian Woman Physicians eligible to practice Western Medicine along with Dr. Anandibai Joshi (she did her medicine at the same time in United States).

🔹Kadambini got her GBMC (Graduate of Bengal Medical College) in 1886.

🔹In 1892, she went to United Kingdom as she was the First Asian Women approved to be trained in European continent. Subsequently, she did her LRCP (Edinburgh), LRCS (Glasgow) & GFPS (Dublin).

🔹After returning India, she began her private practice. Being a radical lady of that era, she played a central role in various progressive movements.

🔹In addition, she also worked with her husband for female emancipation and in various other social activities. She was instrumental in improving the working conditions of female in coal mines in Eastern India.

🔹She also involved herself in the Indian Freedom Movement and was the first women delegate to address the Indian National Congress.

🔹Dr. Kadambini was one of the earliest working women of India and played a meticulous role – both at work and at home. She was too shattered regarding the stereotypical notions of women and went on to pave the way for the modern generation.

A Champion of Women’s Education and Rights