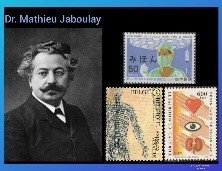 🔸Jaboulay studied medicine at Lyon School of Medicine, France. He started his career as an anatomy demonstrator and later, he became the head of anatomy in 1886.

🔸His interest in anatomy led him to focus on surgery. He was a great innovator and went on to develop invaluable principles in the field of surgery.

🔸In 1889, he was the first to propose Sympathectomy to treat occlusive arterial disease in extremities. He also stripped Periarterial sympathectics to treat exophthalmos, glaucoma, tic douloureux, as well as vascular insufficiency.

🔸In 1902, he was appointed as a Professor of Clinical Surgery in Lyon.

🔸Moreover, he was well-known for his experimental surgeries. He was the first to describe the Side-to-Side Gastroduodenostomy (Jaboulay’s pyloroplasty).

🔸He also invented Jaboulay’s button, which is an alternate to sutures for lateral intestinal anastomosis.

🔸In addition, he was the first to perform Xenotransplantation. By using this method, pig and goat kidneys were transplanted to humans.

🔸He further described the Excision Eversion procedure (Jaboulay’s procedure) for the management of hydrocele. His method for hydrocele repair serves as the most common scrotal Day-Care procedure till date.

🔅 Jaboulay’s amputation – An amputation of entire leg together with hip bone.

🔅 Jaboulay’s method – A procedure for anastomosis of arteries.