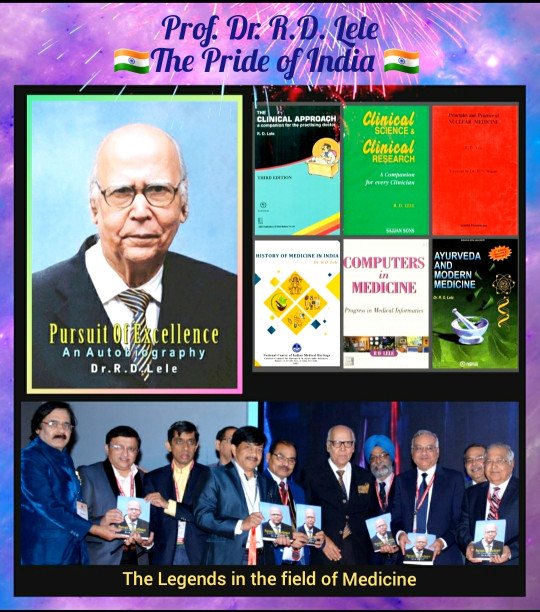 💠Father of Nuclear Medicine in India

🔹Lele was born on January 16, 1928 in a lower middle class family in Hyderabad. Lele and his 3 elder sisters and 1 elder brother were brought up by imbibing Gandhian principles by his parents.

🔹Since childhood, Lele was good in studies, music and sports – especially in cricket. After his schooling, he enrolled to study medicine in Osmania Medical College through Urdu medium and graduated in 1949.

🔹Then he involved himself in rural services for around 5 years and thereafter went for his higher studies to the United Kingdom.

🔹In the UK, initially he got trained at The London School of Hygiene and Tropical Medicine and did his post-graduation in Hammersmith Hospital, where he got trained under an astute clinician and hepatologist Dr. Sheila Sherlock. There, he continued his study about a new subject – hospital based cyclotron and radioactive isotopes.

🔹After his return from UK in 1957, Dr. Lele joined as a Reader at Nagpur Medical College and became a Professor of Medicine in 1963. There he created a clinical museum, diabetic clinic and handed many research projects on common medical conditions.

🔹Meanwhile, Dr. Lele had undergone a specialized training in Nuclear Medicine for one year in Canada. While he was Dean of Grant Medical College and J. J. Hospital, he was also attached as a Chief of Nuclear Medicine of Jaslok Hospital and Research Centre, Mumbai.

🔹He was the first in India to introduce:

🔅Intravenous use of Technetium-99.

🔹Moreover, he was associated with Lilavathi Hospital, Mumbai for 16yrs (since 2002). There he introduced many innovations using radio-immunoassay. In collaboration with Dr. Shashank R. Joshi, an eminent Endocrinologist and Diabetologist, the duo did many research projects in the field of diabetology.

🔹Prof. Dr. Lele was also the early propagator of Donar Umbilical cord-Placenta Bank. He influenced both the state and central Government for public health which led to the introduction of Non- Communicable Disease Control Program.

🔹Furthermore, he has published more than 100 scientific papers and 11 books on topics such as clinical medicine, nuclear medicine, computer technology and medicine and Ayurvedha.

🔹Among his books, “Clinical Science and Clinical Research” (1993) and “Clinical Approach” (Oxford University Press, 1997) have been widely acclaimed as worthy companions for the practicing doctor.

🔹For his immense contributions, he has received galore of awards, some are:

🔅Padma Bhushan Award from the President of India in 1992.

🔹The publication of his autobiography “Pursuit of Excellence” is a powerful narration of the life story of a true son of mother India. It’s a must read inspiring book and teaches the way he approached medicine as well as his life. It was published in 2017, on the eve of celebrating his entry into the 90th year of life.

A Legendary Doyen of Medicine

The Teacher of Teachers