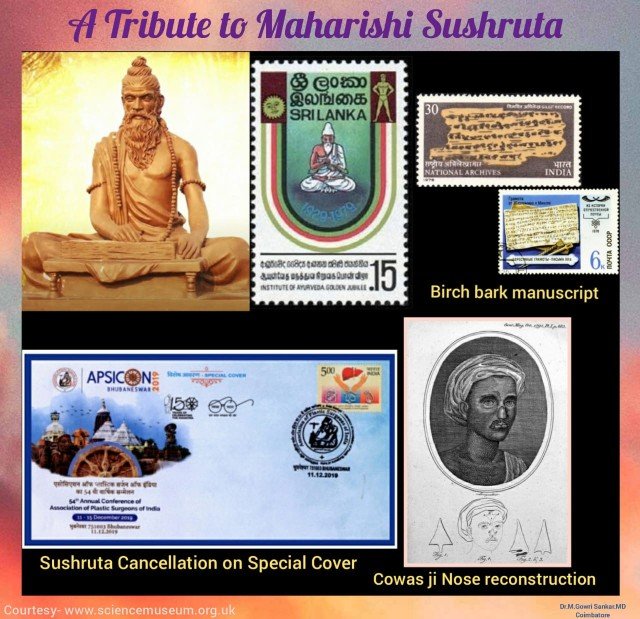 🔹According to Medical scholars of India, Sushruta lived and practiced medicine from 600 BC to 1000 BC (many centuries before Hippocrates and Galen).
🔹He was believed to be the disciple of Lord Dhanvanthri, he also taught and practiced medicine in the city of Varnashi.
🔹In fact, Sushrutha is the base of Indian medicine and considered the “Father of Indian Medicine” and the “Father of Plastic surgery”.
🔹His book Sushruta samhita was one of the ancient treatise and the source of knowledge of ancient India in medicine. It explained all about the general medicine and his extraordinary surgical skills and methods.
🔹Moreover, he had described more than 300 surgical procedures, 120 surgical instruments, enumerating 1120 diseases and 700 medicinal herbs and its applications as well.
🔹He further developed many special and practical techniques in dissections and studied the anatomy of human body.
🔹He then stated and described Hritshoola (heart pain), circulation of body fluids ( Blood as Rakta dhatu & Lymph as Rasa dhatu ), Madhumeha (diabetes), hypertension, obesity and leprosy.
🔹He also demonstrated the techniques of making incisions, excisions, removal of foreign bodies, tooth extraction and surgeries like rhinoplasty, cataract surgery, caesarian section and so on.
🔹He initiated and used wine as an anesthetic agent and described the methods of stitching the intestines by using ant’s head 🐜as stitching material.
🔹In addition, he had shown interest in the field of orthopedics. There, he classified dislocations of joints into 6 types and fractures into 12 types.
🔹He then explained the methodology of treating fractures by traction, manipulation appositions, stabilization including rehabilitation methods and role of prosthetics.
🔹Furthermore, he dealt with embryology and described the sequential development of the fetus.
🔹Actually, our indigenous practice of rhinoplasty came to light by the British. During the Anglo – Mysore war in 1792, Cowas ji, a bullock cart driver of East India Company became prisoner of war to Tipu Sultan. Tipu soldiers had chopped his nose and one hand as a punishment.
🔹However, his nose was reconstructed by a Potter in Pune. Actually, the potter had done a wax mould nose, then dissected the required forehead skin flap and turned back to cover the nose by keeping the small pedicle at the root of the nose to maintain the flap vascularity.
🔹The potter’s surgery was witnessed by British surgeons and they published this successful nose reconstruction in Madras Gazette as well as in The Gentlemen’s Magazine (first magazine in the world from London) in the month of October 1794 under the title The Curious Surgical Operation. This created a great impact in European medical field.
🔹Exactly 100 years after this incidence in 1890, British Lieutenant Hamilton Bower had found a Brahmi- manuscript on a Birch-bark at the street of Chinese Turkistan.
🔹Then, Bower came to know the importance of this oldest medical treatise. Hence, he handed over the same to the Asiatic Society of Bengal at Calcutta and they became the first to complete English translation of Sushrutha Samhitha which came in three volumes in 1907.
🔹In Sushruta Samhitha, his principles of rhinoplasty exactly coincides with Potter’s rhinoplasty, which was followed traditionally from ancient Sushruta period. This grabbed the attention of the medical world and brought him fame – “Sushruta, the Originator of Plastic Surgery”.
🔹An eminent surgeon Dr. Allen Whipple, a major innovator of 20th century in pancreatic surgery had once said, “All in all, Sushruta must be considered as the greatest surgeon of the Pre-medieval period.”