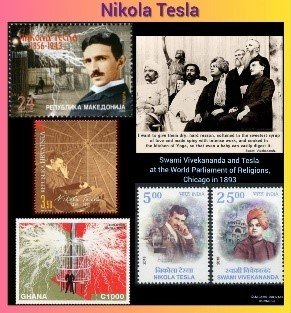 🔹During his young age, Tesla got inspired by his physics teacher, who had demonstrated to him the electricity. Further, Tesla wanted “To know more about this wonderful force.” Hence, he studied electrical engineering and physics in Austria during 1870.

🔹After completion of his studies, he emigrated to United States where he began his career with Thomas Alva Edison. In a short period, he started his own Tesla Corporation, and developed electrical and mechanical devices.

🔹In 1882, he had done a ground breaking discovery called the Rotative Magnetic Field – which was a fundamental discovery in MRI scan design.

🔹 Subsequently, he had discovered X-rays at the time of Roentgen. His first X-ray was that of his friend Mark Twain and was done by using crookes tube. Then he published his X-ray photos in the Electric Review book during 1896.

🔹Unfortunately, Tesla’s work got destroyed due to sudden fire accident at his warehouse. At the same time Roentgen announced his discovery of X-rays.

🔹In medical field, Tesla is the SI derived unit of magnetic flux density and today MRI machines are calibrated as 1.5 Tesla & 3.0 Tesla.

🔹Also, he had 300 patents that covered every part of science and technology, and are very popular till date.

🔹His other significant discoveries…

🔹Since Tesla got inspired, he charmed to hear Vivekananda’s notions of Prana, Akasha and Kalpas, which are the three elementary concepts of the Vedantic doctrine respectively. Tesla translated these into the modern science concepts – Prana as a unit of Energy, Akasha as Matter, and Kalpas as Time.

🔹Thus, Tesla developed the understanding of Indian Vedic Science and began using the Ancient Sanskrit Terminologies and Concepts for his world acclaimed work on Free Energy.

🔹In order to honour the magnetic duos, in 2018, India and Serbia jointly issued Swami Vivekananda and Nikola Tesla stamps for honouring the 70 years of diplomatic relations between India and Serbia.

🔹In fact, Nikola Tesla was more concerned about inventions than fame.

🔹Hence, he proved himself as a genius, whose discoveries have played a significant role in upgrading us to the modern era. Moreover, his inventions have not only shaped the medical field but the entire world.

The True Genius of the 20th Century