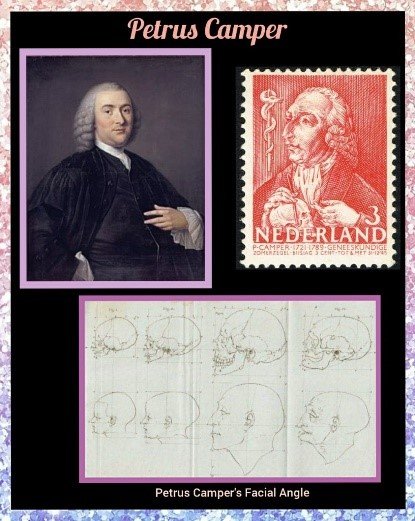 💠Pioneer in the Field of Inguinal Hernia

🔸Camper was born in Leiden, Holland. He studied medicine and philosophy at the University of Leiden.

🔸In fact, he was one of the most multifaceted scholar of 18th century, who had done detailed studies in anatomy, surgery, midwifery, anthropology and veterinary science.

🔸Also, he was one of the first to get involved in comparative anatomy and palaeontology. He dissected and studied the anatomy of humans as well as animals such as orangutan, rhinoceros, elephant etc.

🔸He further described the Canal of Petit in the eyes of different animals and was the first to describe that lens of the eye is made up of fibres.

🔸He also studied osteology of birds and discovered the presence of air in the inner cavities of bird’s skeletons.

🔸Subsequently, he invented the measurement of the Facial angle (angulus fascialis) to study the variation in different races.

🔸By facial angle, he investigated the relationship between man and animals (especially the Orangutan). But in modern days, this fascial angle is used as a guideline by the artists.

🔸Moreover, he was one of the first to describe how inguinal hernia develops. By his dissections, he contributed a better understanding of the anatomy of the Inguinal canal. Thereby, he broke the concept of cause of hernia by the rupture of peritoneum.

🔸Thereafter, he invented T bandage techniques to return a prolapsed anus into its correct position.

🔸He then introduced several new instruments and procedures for surgery and obstetrics. Mainly he focussed on delivering babies whose head were stuck during birth.

🔅 Camper’s plane – A plane from tip of the anterior nasal spine to the centre of the bony external auditory meatus on the right and left sides.

🔅 Camper’s instrument – Vectis – A lever which is a precursor to the obstetrical forceps.

🔅 Camper’s ligament – Fascia extends between the ischio pubic rami inferior to the sphinter urethra and the deep transverse perineal muscles.

The Originator of Cephalometric