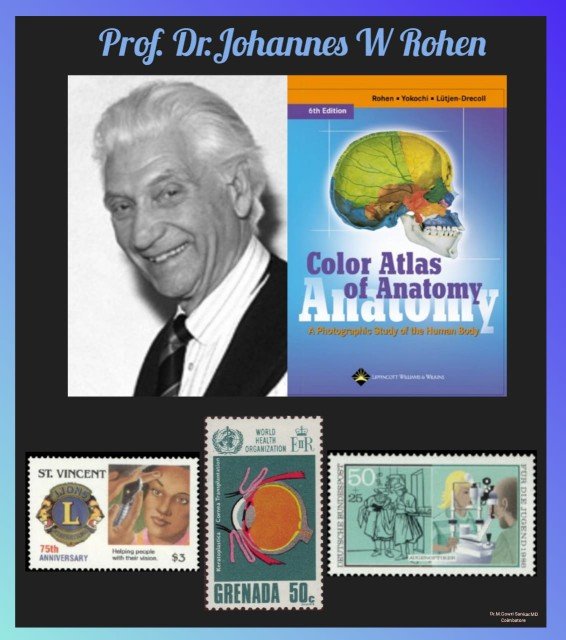 🔹Rohen has studied medicine and received his M.D. degree in 1946 from the University of Tubingen, Germany.
🔹He further enriched his knowledge in anatomy and embryology at the Anatomical Institute of the University of Mainz in 1953 and began his career there as an assistant.
🔹He then became the Head of the Department of Anatomy in Marburg during 1964 and later served in Erlangen during 1974.
🔹His keen scientific interests include Functional morphology of tissues of the anterior segment of the eye, the eyelid apparatus, and the pathogenesis of glaucoma.
🔹Consequently, he was the first to analyze ultrastructural changes in the trabecular meshwork in various forms of glaucoma by using trabeculectomy specimens.
🔹Subsequently, he was the first to grow trabecular cells in cell and tissue cultures. He further developed a new theory of accommodation.
🔹Furthermore, his functional view on morphology had introduced him into various fields of Anatomy and he wrote textbooks on:
🔅Functional Histology
🔅Functional Embryology
🔅Functional Neuroanatomy
🔅Functional Anatomy
🔹In fact his three-dimensional reconstructions of the different functional systems of the eye, summarized in the Handbook of Microscopic Anatomy created a strong basis for scientific Ophthalmology.
🔹In addition, his Photographic Atlas of Gross Anatomy has been translated into eighteen languages and ultimately became a standard book.
🔹Eventually, Dr. Rohen was honoured with Alcon Research Award for his achievements in Glaucoma research, and the Albrecht von Graefe Award of the German Society of Ophthalmology.
🔹Dr. Rohen has been a great academician even at his age of 90 years. Also, he still holds his traditional introductory lecture for students of anatomy in Erlangen.