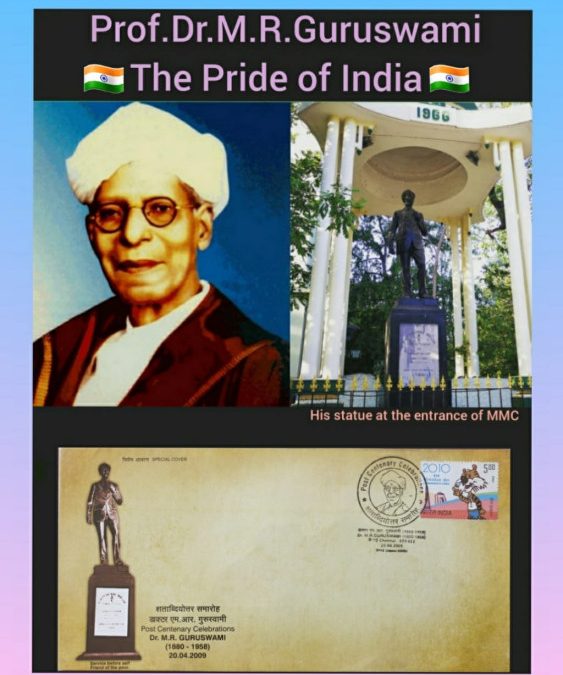 🔸Prof. Dr. Guruswami was born in Nalamangala, Mysore province. His father was a prosperous building contractor. Sadly, he lost his father during his school days.
🔸With the aid of his mother, Guruswami completed his school education. Actually, he used to walk several miles to attend the school. After schooling, he did his BA degree at Central College, Bangalore.
🔸Under the scholarship of Government of Mysore, Guruswami studied medicine at Madras Medical College. During his studies, he was an outstanding student and won the Gold Medal for surgery.
🔸When the Doctorate degree was introduced in 1920, he received the Doctorate in Medicine at the University of Madras.
🔸He began his career at Madras Presidency Medical Department and initially was posted at Tanjore District Headquarters Government Hospital, where he continued for many years.
🔸Subsequently, he served as a lecturer in anatomy at the Tanjore Medical School.
🔸During pre-independence most of the top jobs in Government hospitals in India were invariably given to British doctors.
🔸But luckily in 1915, Dr. Gurusami was transferred to Madras and got an opportunity to work in Madras Medical College.

🔸Moreover, he became the first Indian to get appointed as a Professor of Therapeutics at Madras Medical College in 1920. This post was regarded to be a very high position, which was earlier occupied only by the British. Also, he was sent to England to study the teaching of therapeutics.

🔸In 1930, under his head the Department of General Medicine was started as a separate unit at Madras Medical College.
🔸In fact, he was widely known as an excellent bedside teacher, who diagnosed many diseases by percussion technique. The Britishers recognized his gift of diagnosis and mentioned in their Journal Materia-Medica as the “Father of Medicine.”
🔸Indeed, he was a man of few words. He often remarked that “Talking long and too much was a disease by itself” and every Friday he observed silence.
🔸Later, he took a leading role in the formation and inauguration of the Association of Physicians of India (API) in Chennai in 1944 and became its founding member.
🔸He also served as…
🔅Director of the Indian Bank.
🔅Member of the Legislative Council, Madras.
🔅President of the Temple Renovation Committee, Madras.
🔅President of TTV High School. He contributed 20 acres of land and significant funds to the school – now functioning as Dr. Guruswami Mudaliar TTV High School at Chennai.
🔸To honor Dr.Guruswami’s fabulous service, his statue was established at the entrance of Madras Medical College.
🔸As he lived in the Kilpauk area, Chennai, a popular bridge there was named after him as the “Guruswami Mudaliar Bridge” and a block in Kilpauk Medical College, Chennai is named after him as well. Also, the Tamil Nadu API chapter has introduced the Dr. Guruswami Mudaliar Award for exemplary service in the field of medicine.