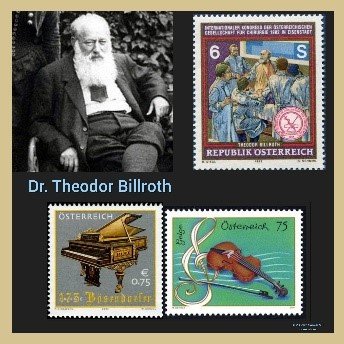 🔹Billroth belonged to a Swedish family. Unfortunately, Billroth lost his father when he was five years old. Then, he was brought up by his mother. He was interested in studies as well as in playing piano.

🔹As per his mother’s wish, he enrolled to study medicine at the Universities of Gottingen and Berlin at Germany and graduated in 1852.

🔹He then began his career as a faculty at the University of Vienna and later became the Professor of Surgery.

🔹In fact, Dr. Billroth is considered one of the most innovative surgeon and educators of the 19th century. He was also an early adopter of White coat and Anti-septic techniques in surgical practice.

🔹In Vienna, he created one of the finest schools in the history of surgery, where he carried out pioneering work in experimental studies, surgical pathology and operative surgery.

🔹He also created many significant milestones in the field of Surgery. Those are as follows…

🔅In 1871, he successfully did the first esophagectomy.

🔅In 1881, he was the first to perform partial gastrectomy for gastric tumor.

🔹Moreover, his successful execution of operation initiated the Modern Era of Surgery.

🔹Also, he served as a military surgeon during the French-German War. His popular talk on War Budget had emphasized the need of effective ambulance system in the war field.

🔹Apart from that, he was a talented amateur Pianist and Violinist. He was the very first person who made an attempt to do a scientific study on music.

🔹Additionally, he had published many articles and books in the field of medicine. His dream work and great innovative study on “Physiology of Music” was published after his death.

A Man of Excellence in Vocation and Avocation