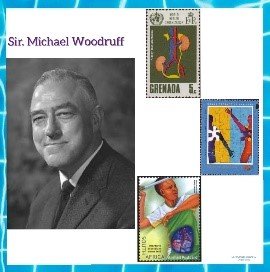 🔹Woodruff was born in London. His father was a Professor of Veterinary medicine. As his father got a promotion in the University of Melbourne, the family shifted to Australia.

🔹Hence, Woodruff was brought up in Australia and he studied medicine at the University of Melbourne and then did his Master of Surgery in 1941.

🔹During the outbreak of Second World War, Dr. Woodruff was sent to serve as a medical officer in Australian Army medical Corps. But unfortunately, he was captured by Japanese troops and imprisoned in Changi prison, Singapore for three and half years.

🔹While he was in prison, he used to read medical books including Maingot’s Surgery Textbook.

🔹At the same time, he noticed his fellow prisoners were suffering from severe vitamin deficiencies due to poor quality of food. As a result, he published his studies as “Deficiency diseases in Japanese prison camp.“

🔹After some time, the war came to an end. Then, Dr. Woodruff emigrated to UK and took fellowship at Oxford University. He also completed his FRCS exam in 1947. There a surprise was waiting for him – one of his examiners, Colonel Julian Taylor, was with him at Changi prison camp.

🔹After his successful studies, he paid attention to organ transplantation. Subsequently, he began his research in the field of Graft rejection, immunosuppression and Graft versus Host Disease. Thereby, he became an expert in transplant immunology.

🔹In October 1960 at Edinburgh Royal Infirmary, he successfully performed the first kidney transplant in the UK.

🔹During his service, he successfully performed 127 renal transplants until his retirement in 1976.

🔹Even after his retirement, he involved himself in Cancer immunology by using Corynebacterium parvum in inhibiting the growth of solid tumors of breast and melanoma.

🔹Apart from that, he penned and published more than 200 scientific papers and wrote around 7 books in medicine. His famous books are as follows…

🔅Transplantation of Tissues and Organs in 1960.

🔅The Interaction of Cancer and Host in 1980.

🔅His autobiography – Nothing Venture Nothing Win in 1997.

🔹Dr. Woodruff had an enormous influence on the field of organ transplantation. Ultimately, he was honoured with many International awards and was knighted in 1969.

An Academic DUO – A Surgeon and a Scientific Researcher