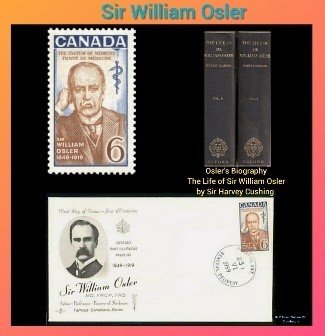 🔹Osler pursued his Medical studies at McGill University Faculty of Medicine in Montreal, Canada and graduated in 1872.

🔹After completion of his post graduate training in Europe, he joined as a Professor at McGill University in 1874.

🔹He was a sagacious Physician and his charismatic personality facilitated numerous enhancements in the field of medicine. He was the first to create the concept of Journal club. Also, he was the founder of Association of American Physicians.

🔹Moreover, he was one of the four founding Professors of Johns Hopkins Hospital, Baltimore.

🔹Consequently, he became instrumental in creation of Johns Hopkins School of Medicine and served as its First Professor of Medicine.

🔹Additionally, he began the first Medical Residency Program as a special training for physicians and was the first to bring the medical students out of a study hall for Bedside Clinical Medicine. He also pioneered the practice of bedside teaching by making rounds with a handful of students.

🔹He was a great diagnostician and always appeared with a Stethoscope.

🔹His first significant and scientific textbook of medicine was “The Principles and Practices of Medicine,” which was published in 1892 and later translated in many languages.

🔹Osler was a versatile reader, who had a great collection of books relevant to History of Medicine. His historical collections have been arranged at McGills University’s Faculty of Medicine as Osler’s Library.

🔹The Great Clinician wanted his epitaph to read – “He taught medical students at the bedside.”

The Greatest Icon and Seminal Figure of Modern Medicine

The Father of Patient-Based Education