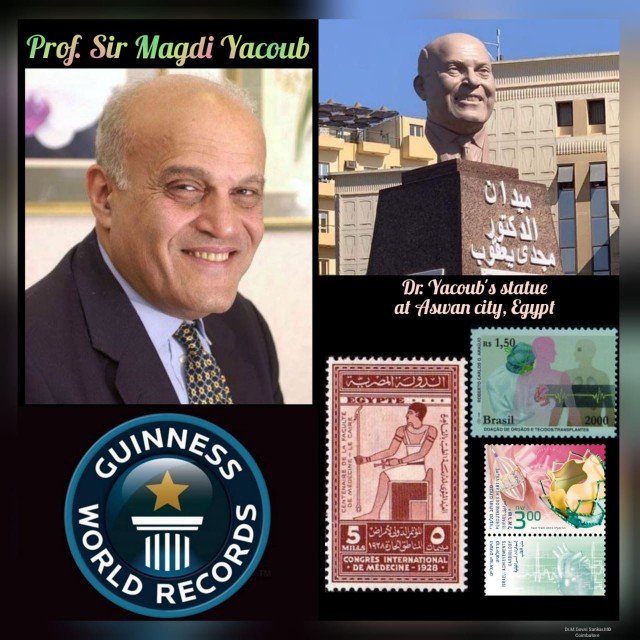 🔹Yacoub was born in Egypt and his father was a famous surgeon there. He was inspired by his father to become a doctor. Hence, he studied medicine at Cairo University and finished his graduation in 1957.
🔹Then he emigrated to United Kingdom in 1962 and worked in leading hospitals in cardiac surgery. Thereby, he was well trained in cardiothoracic surgery and became a consultant cardiothoracic surgeon at Harefield Hospital in 1973.
🔹At the beginning, he was an innovator in his field. He pioneered the Modern Arterial Switch Operation to treat the children born with Transposition of the Great Arteries.
🔹He further established the The Harefield Hospital Transplant Programme in 1980, which is the largest transplant center in the world till date. By the end of the decade he and his team had performed about 1000 transplant procedures.
🔹In the year 1983, Dr. Yacoub performed the UK’s First Heart and Lung Transplant. Subsequently he was appointed a professor at the National Heart and Lung Institute in 1986 and simultaneously, he involved himself in the technical development of the Heart and Heart-Lung Transplantation.
🔹Furthermore, he established the Ross Procedure during his career. By this procedure, the patient’s aortic valve replaced with their own pulmonary valve, while the pulmonary valve is replaced with a pulmonary  allograft (valve taken from a cadaver).
🔹He also pioneered the techniques which include tissue engineering of heart valves from stem cells as the first time in history. He is also well known for his innovations like novel left ventricular assist device, myocardial regeneration and transplant immunology.
🔹Moreover, he has published around 1,000 articles and authored several books on the heart surgery techniques.
🔹Apart from all the above, Dr. Yacoub founded The Chain of Hope, a charity that provides lifesaving cardiac surgery to the children from developing countries of the world.
🔹In fact, Dr. Yacoub is a world’s leading transplant surgeon and also a Guinness World Record Holder for successfully completing most number of surgeries (100) in one year during 1980.
🔹Actually, Dr. Yacoub is also recognized for one of his patients called John McCafferty, who received his new heart on October 1982. He got a place in the Guinness World Record Book as the world’s longest surviving heart transplant patient – surpassing the previous Guinness World Record of 30 years.
🔹Ultimately, Sir Magdi Yacoub became a true icon and an inspirational figure in the field of Cardiothoracic surgery. He retired at the age of 65 years in 2001.
🔹Still he continues his work as an ambassador and consultant of transplant surgery and supports cardiac surgery on children through his charity – The Chain of Hope.

The King 👑 of Hearts