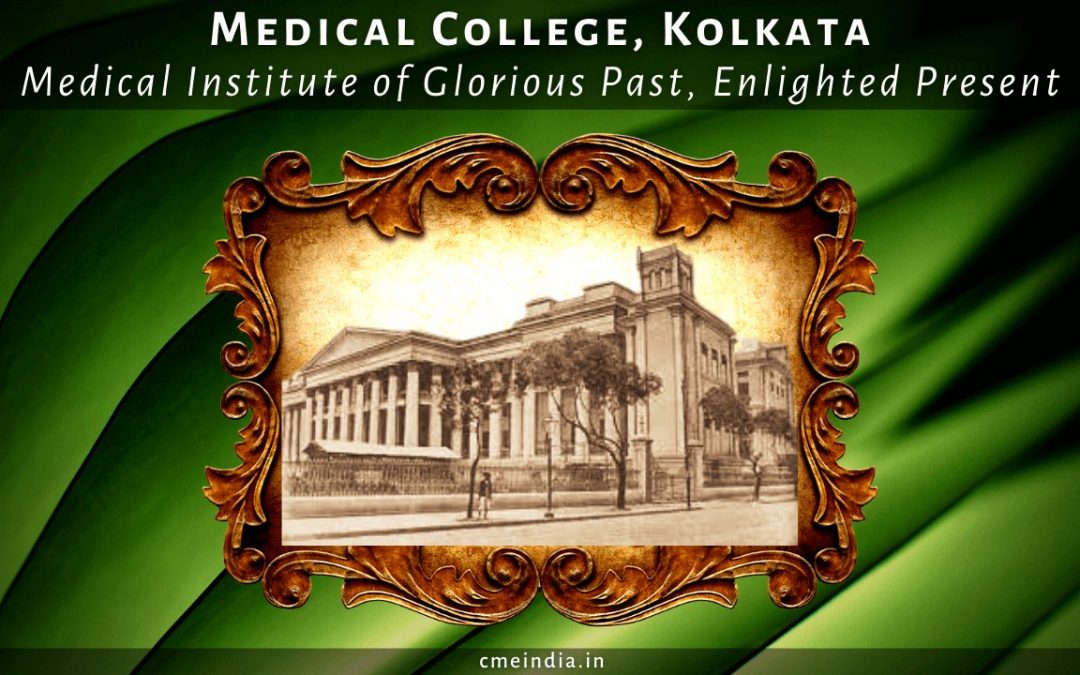 Thrown open in 1852, the Medical College Hospital (MCH) building is the oldest surviving hospital block in Asia. Though it was constructed shortly after Ecole de Médicine de Pondichéry, MCH witnessed many firsts in the continent’s history of Western medicine.

Built on land donated by Mutty Lal Seal, the premises also witnessed firsts in lectures on Chemistry, Clinical surgery and Human Anatomy. These were the first taste of western medical science developed in Europe. Till then, Indians were experienced in Ayurveda and Unani, the indigenous streams of medicine science.

The process of educating Indians in western medicine began in 1822 when the government laid down a plan for 20 young Indians to fill the positions of doctors in civil and military establishments of the Presidency of Bengal. The outcome was the establishment of ‘The Native Medical Institution’ (NMI) in Calcutta (June 21, 1822) where medical teaching was imparted in the vernacular. Treatises on Anatomy,  Medicine and Surgery were translated from European languages for benefit of students.

In general, the medical education provided by the colonial state involved parallel studies in Western and Indigenous medical systems.

Towards the end of 1833 a Committee was appointed by the government of William Bentinck in Bengal to report on the state of medical education and also to suggest whether teaching of indigenous system should be discontinued. The Committee presided by Dr. John Grant criticised the medical education imparted at the NMI for the inappropriate nature of its training and the examination system as well as for the absence of courses on practical anatomy. The Committee submitted a report on October 20, 1834, wherein the Anglicists’ point of view prevailed over the Orientalists. The Committee recommended that the state found a medical college ‘for the education of the natives.’ The various branches of medical science cultivated in Europe should be taught in this college. The intending candidates should possess a reading and writing knowledge of the English language, similar knowledge of Bengali and Hindustani and a proficiency in Arithmetic. This recommendation, soon followed by Macaulay’s minute and Bentinck’s resolution, sealed the fate of the school for native doctors and medical classes at the two leading oriental institutions of Calcutta. The NMI was abolished and the medical classes at the Sanskrit College and at the Madrasa were discontinued by the government order of 28 January 1835.

The proposed new college, known as the Calcutta Medical College (CMC), which was established by an order of 20 February, 1835 ushered in a new era in the history of medical education in India. It’s stated purpose was to train native youths aged between 14 and 20 irrespective of caste and creed in the principles and practices of medical science in accordance with the mode adopted in Europe. This marked the end of indigenous medical learning which in its turn evoked long-term reaction among the Indian practitioners of indigenous medicine and later the nationalists who strongly criticised the government for the withdrawal of patronage to the Indian system. Different sections of the Indian population responded differently to this newly founded system of education. Among the Hindus the Brahmins, Kayasthas, Vaidyas, were particularly enthusiastic about medical education.

The college started on 20th February 1835 with the admission of students. Twenty students were selected through a preliminary examination of about one hundred candidates. These boys had received their education either at the Hindu College, Hare School or the General Assembly’s Institution. Twenty-nine more students had already been selected. All of these 49 students were to receive a monthly stipend of Rs 7 from the government, but it was to be raised gradually. The students were to remain in the College for a period of not less than 4 years and not more than 6 years. On completion of their studies the students had to sit for a final examination. Successful candidates were to receive from the President of the Committee the education certificates of qualifications to practice surgery and medicine. They could also enter public service where they would be called ‘Native Doctors’ receiving an initial pay of Rs 30 per month which would be raised to Rs 40 after 7 years and to 50 after 14 years of service.

The College was placed under the charge of a full-time Superintendent who was assisted by a European Assistant. The government was required to provide a suitable building, a library, anatomical materials and other objects necessary for the education of the students. For practical clinical experience, the students had to visit the General Hospital, the Native Hospital, The Hon’ble Company’s Dispensary, the dispensaries for the Poor and the Eye Infirmary. Dr. MJ Bramley was appointed Superintendent and Dr. H.H. Goodeve and WBO’ Shaughnessy  were appointed professors. Only one member of the staff of the Native Medical Institution, Madhusudan Gupta (an Ayurvedic practitioner trained in western medicine), was transferred to the new college.

The classes were started in an old house at the rear of the Hindu College.  In May 1835, the establishment was shifted to the premises the College has since occupied. During the first year of study, a series of lectures on anatomy and physiology were given. During 1837 and 1838, the staff of the College was extended and enriched by the appointment of C.C. Eggerton as Professor of Surgery and Clinical Surgery, Nathaniel Wallich as Professor of Botany and R O’Shaughnessy as demonstrator of Anatomy.

Many luminaries of Calcutta including Dwarkanath Tagore and Ram Comul Sen enthusiastically supported medical education at the CMC by instituting scholarships and prizes for brilliant students.

Four students of the College were sent to England through the financial help of Dwarakanath Tagore, Professor Goodeve and partly of the government. Three of them, including Dwaraka Nath Bose, Bhola Nath Bose, and Gopal Chunder Seal passed the examination for MRCS (Member of the Royal College of Surgeons) in 1846 and returned to India to join the uncovenanted Medical Service. Surjee Coomar Chukerbutty remained there, obtained the MD degree of the University College of London and became the first Indian to pass the examination for the Indian Medical Service and join the covenanted Medical Service.

He also became a distinguished professor of the Medical College holding the Chair of Materia Medica from 1864 till his death in 1874.

Other changes brought about in the College aimed at fulfilling the needs of the state to supply an increased number of medical personnel for employment in the army and for combating epidemic diseases among the civilians. The government order of August 1839 instituted medical classes through the medium of Urdu and Hindustani. Lessons were imparted in Anatomy, Materia Medica, Medicine and Surgery.

Dissections and teaching methods followed western principles. Fifty students were selected initially. They received a monthly allowance of Rs 5 each and had to undergo clinical training by discharging hospital duties at the Medical College Hospital, founded in 1838.

In 1840, a large female hospital containing 100 beds was constructed on the College grounds by liberal public subscription. This was followed by the opening of a large hospital in 1853, designed to accommodate 350 patients. Other hospitals were: the Eden Hospital (1881-82), the Ezra Hospital (1887), the Shama Charan Laha Eye Hospital (1891) and the Prince of Wales Surgical Block, opened in March 1911.

To meet the rising demand for native doctors, the Government introduced a Bengali class at the Calcutta Medical College in 1851. Proficiency in Bengali was an essential prerequisite for admission to this class. The theoretical and practical courses were almost the same as  in the Hindustani class. 21 students admitted in this class were examined in 1853. Qualified students filled the ranks of the subordinate medical services as Hospital Apprentices or Vernacular Licentiates in Medicine and Surgery (VLMS) or found employment under Deputy Magistrates attached to Charitable Dispensaries and Jail Hospitals. In 1856-57, the class had 88 students and the number went on increasing till it touched the figure of 635 in 1872. The students mostly belonged to the Brahmin, Kayastha and Vaidya castes.

In 1864, the Bengali class was divided into two sections: The Native Apothecary section, which trained students for government employment, and the Vernacular Licentiate section which gave instructions in medicine and surgery in order to enable the students to practice among the less affluent sections of Indians. In 1873, both these classes were transferred to a new school called the Sealdah Medical School or the Campbell Medical School. The Hindu Bhadralok class – Europeans and Eurasians dominated the student population. Although during 1880- 1890 there was a small increase in the number of Muslim students, their proportion was very small.

A resolution of 29 June 1883 allowed the admission of women into the CMC after doing FA. Kadambini Ganguly, a Bengali Brahmon became the first woman admitted to the CMC. In 1884 the government offered scholarships of Rs 20 per month to all female students. Bidhu Mukhi Bose and Virginia Mary Mitter received these scholarships and became the first Indian women to graduate during 1888-89.

An important change occurred in 1906 when the Calcutta University decided to discontinue the LMS examination held since 1861 and henceforth confer only the degrees of MB and MD. The last batch of LMS students was examined in 1911.

Medical College, Kolkata is not only a medical institute producing medical scholars for years, it is a chapter in history describing thousands of historical events it has gone through.

The College has the glory of being called first in the history for:

1839 – Institution had a spacious theatre for 500 persons, apartments for  practical anatomy, a laboratory, museum, library and hospital.

1845 – The Medical College was duly registered in England. First batch of 4 students under the patronage of Prince DwarakaNath Tagore left for England to pursue their study.

1846 – Examination Council was shifted from government to Professors of the departments.

1850 – Professorship of medical jurisprudence was separated from that  of Material Medica.

1852 – The oldest hospital of east was opened to accommodate 350 patients.

1856 – A Chair of Comparative Anatomy was established.

1857 – The college got affiliation of Calcutta University.

1860 – The classes were segregated as a. Class I Primary for LMS, MB and MD examinations, b. Class II Apprentice, c. Class III Hindostanee and d. Class IV Bengalee.

1864 – A professorship of Hygiene was established.

1871 – Pathology was separated from Medicine.

1874 – Minimum qualification for admission to medical college was raised to First Arts Examination.

1876 – First lady student Kadambini Ganguly was admitted to the college.

1884 – With the aid of Maharani Swarnamoyee a hostel for Indian girls was constructed.

1897 – An earthquake on June 12 caused considerable damage to the  hospital.

1907 – Physics was declared an independent subject in the course. A  Chair of Professor in the subject was sanctioned.

1911 – Dewan Bahadur Hiralal basu was the first Indian to chair the  Anatomy department.

1914 – Half yearly M.B. examination were introduced.

1916 – Female Certificate Class – a separate class for female student was abolished. The preliminary qualification for admission was raised to I.A. or I.Sc.

1921 – A separate chair of Pharmacology was created and Lt. Col. R.N. Chopra was appointed for the chair. Second professor of Midwifery was  created.

1930 – 6 Indian probationer nurses were inducted in the hospital. 1933 – A Medical Council was constituted to grant recognition of Medical Degrees. Sir Hussain Suhawardy, an ex-student of the college was nominated as the President of the council. De. Kedarnath Das became the Inspector of Examinations in the council

1935 – The centenary was celebrated with grandeur.